Roethlisberger Questionable, Williams Out for Playoff Game in Denver 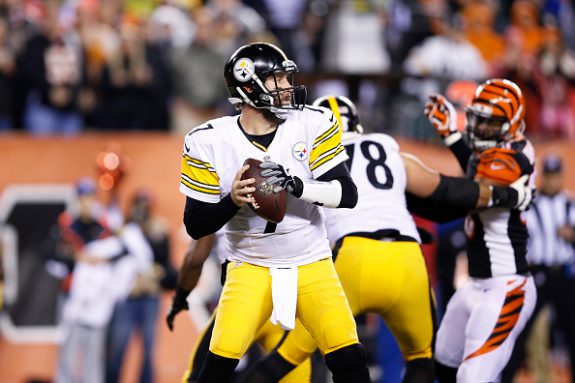 While we already know that Antonio Brown won’t go Sunday against the Broncos, it does appear the team will have quarterback Ben Roethlisberger under center.

The Steelers franchise QB threw Friday for the first time this week, and is officially listed as ‘Questionable’ for Sunday’s showdown with Peyton Manning and company.

All signs though point to Roethlisberger playing in the game that could see the Steelers season end, or continue with a trip to the AFC Title game against either the Chiefs or Patriots with a win.

Mike Tomlin said today that Roethlisberger did everything he was asked, and that sounds good enough for him to go against Denver.

As for running back DeAngelo Williams, he won’t be taking the field Sunday, as he, like Brown, has been ruled out for Sunday’s game with the ankle injury suffered against the Browns in the season finale.

The running back situation will be handled by Jordan Todman and Fitzgerald Toussaint, who together went for 123 yards against the Bengals Saturday night.