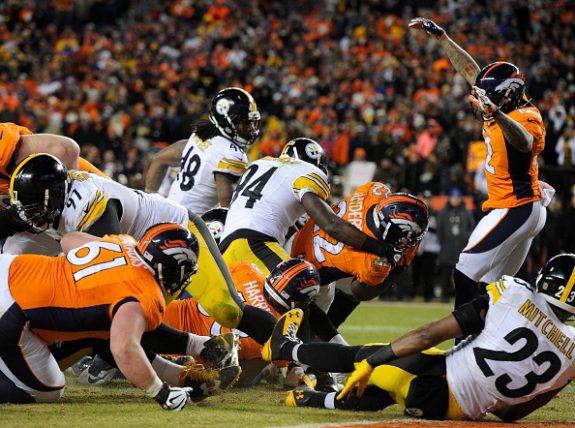 It was there for the taking, and in the end critical mistakes did in the black and gold, ending their 2015 season.

The result was a tough to swallow 23-16 loss to Peyton Manning and the Denver Broncos, ending the Steelers season with a tremendous effort highlighted by the play of banged up quarterback Ben Roethlisberger.

The QB, who was playing with a sore shoulder and a reported two torn ligaments, threw for 339 yards and was effective against the NFL’s first ranked defense.

He did it without his favorite wide out, Antonio Brown, and instead turned to Martavis Bryant, who caught 9 passes for 154 yards. Rookie Sammie Coates in his first game even got in on the action without Brown, catching two passes for 61 yards.

Many will point to a critical fumble by Fitzgerald Toussaint with 10 minutes to play that the Broncos recovered and the Steelers up 13-12. Denver with Manning leading the way drove the field and C.J. Anderson scored the winning touchdown with 3:04 left to play.

After going up 20-13 with a two-point conversion, the Steelers had one last shot with Roethlisberger, but after a 17-yard gain on the first play, they were unable to move the ball anymore, and turned it over on a Ben sack on fourth down.

An attempt at an onside kick failed, and Denver ran out the clock to advance to the AFC Title game.

It’s the first loss for Roethlisberger in an AFC Divisional Playoff game, dropping him to 4-1 overall. As always, Mike Tomlin had a good attitude after the loss. ‘We came up a few plays short, such is life,’ the coach said.

The Steelers outgained Denver 396 to 324, and in the end it came down to just a couple plays that didn’t go the Steelers way.