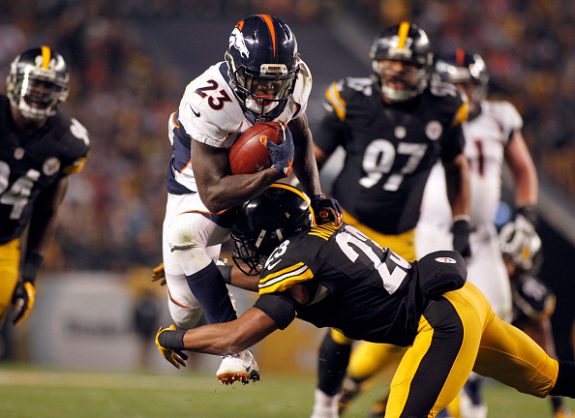 It’s three days before the AFC Divisional showdown with the Denver Broncos in Denver, and things look bleak for the black and gold with the fact that they could be without all three of their top offensive playmakers for the biggest game of the season.

While people are still hopeful that Ben Roethlisberger and Antonio Brown will be able to play, things don’t look good for DeAngelo Williams and his bum ankle.

Even if Ben and Brown do play, they won’t be 100 percent, which means it will be important for others in the Steelers offense to step up and make plays.

Today we run down a couple thoughts on how the Steelers can possibly pull off this upset against future HOF QB Peyton Manning and the #1 seed Broncos.

1. Gotta hit a Big Play in the Offense

That means either Martavis Bryant and or Markus Wheaton are going to have to get loose and break a tackle or two, because I don’t see the big play coming from a long throw. Yards after catch are going to be critical, and we have seen flashes from both wide outs, but they need to both step up and produce, even if Antonio is able to pass the concussion protocol and get out there and try to make plays. If Bryant and/or Wheaton can break a big one, it will go a long way in helping the Steelers pull off the win.

In his last four starts, Peyton Manning has thrown three touchdowns and 10 picks, including a game in which he threw three picks against Cleveland and four picks against the Chiefs. If the Steelers are going to win this game, they have to get to Manning, force him to make throws on the run, and make sure when the ball is in range, pick it off. It’s not going to help just to knock it down, they need to create turnovers and create short fields for a banged up offense.

3. Do What You Can to Take Away the Broncos Screen Game

If there’s one play that Manning and the Broncos are going to try to hit early and exploit the Steelers with it is the screen game. It’s a play that they use often (like the Steelers) and it’s not just to the running backs, as you will see Demaryius Thomas run it and try to get out in space. The Steelers defense will need to step it up and not allow the screen game and Manning’s dink and dunk mentality to get Denver downfield in long drives. Making sure you get off your blocks and swarm tackle is a great way to get Denver out of their screen game mode they like to run.