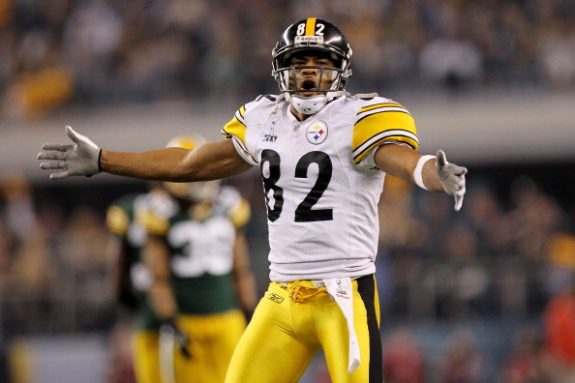 He was one of the heroes of the Steelers Super Bowl win in the 2005 season, and now, 10 years later, he says he wishes he would have never played the game.

The player is former Steelers wide out Antwaan Randle El, who now is retired at the age of 36, and says he has issues going up and down the stairs.

“I have to come down sideways sometimes, depending on the day,” Randle El said in the Pittsburgh Post-Gazette. “Going up is easier actually than coming down.”

He also says he has issues remembering things, and says that he needs his wife to help him.

“I ask my wife things over and over again, and she’s like, ‘I just told you that,'” Randle El said to the Post-Gazette.

“I’ll ask her three times the night before and get up in the morning and forget. Stuff like that. I try to chalk it up as I’m busy, I’m doing a lot, but I have to be on my knees praying about it, asking God to allow me to not have these issues and live a long life. I want to see my kids raised up. I want to see my grandkids.”

It’s a scary story about how a former player still in his 30’s can be having such issues.

Combine Randle El’s account of his life right now with the events of the movie ‘Concussion’ with Hollywood star Will Smith, and it just goes to showing how bad things appear to be for certain former NFL players.

I had the pleasure of meeting Randle El on the Steelers Cruise back in 2014, and he was a gentleman and a delight to be around.

He was on a panel talking about the 2005 Super Bowl team, and also did a chapel service talking about his faith one morning of the cruise, and he was fantastic.

It’s both sad and alarming that just two years later he’s having as many issues as he is. Here’s to hoping the NFL finally starts to put more research and purpose into helping former players like Randle El.