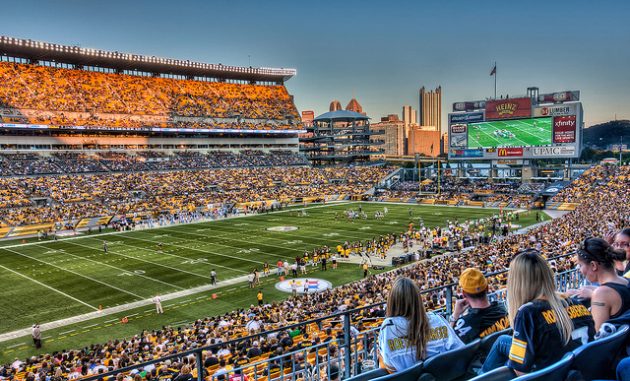 The NFL odds for the Pittsburgh Steelers are increasing every day for the upcoming season; the team is part of the top 5 favorite teams to win the Super Bowl. For most people, there is no better place to watch a Steelers Game than a local bar and grill where they can marinate in the glory of their favorite players in the company of friends. I am no different here. My friend (an unfortunate Vikings fan) and I have been going to this one local haunt for decades. We even have a favorite location, a spot providing us clear view of every screen in the room. As with most eateries, there is a fair amount of representation from various teams on a weekly basis, with the occasional Steelers fan gracing us with his presence. There is something enjoyable about watching other Steelers fans bask in the success of your favorite team, especially college-age fans.

The Steelers were playing the Bengals on this particular occasion. I shook my head as Tyler Eifert headed to the turf, taking a victorious hit to the head from Mike Mitchel after making a snag. I knew the flag was coming and the kid ahead of me was screaming at the referee to recognize what a lot of people thought was a clean hit. My friend seemed intent on expressing his opinions to the kid but I stopped him.

The Bengals Drive came early in the second quarter, the passes between A.J Green, Antwon Blake, and Will Allen interrupted by Blake slamming Cincy WR to the turf out of bounds. The personal foul clearly irked the kid who slapped the bar top furiously and questioned the sanity of the referees. That he looked at me for support even while complaining about Blake body slamming Green out of bounds was amusing. Upon calling him out for it, he told me that he prioritized being a Football Fan over being a Steelers Fan.

This is a debate that has sparked many a fight, the difference between Football fans and true football fans. The Kid in front of me was more football fan than Steelers Fan. Yet, everyone is a football fan first, before finding a particular team to support. Everyone wants to see a well-played, well-refereed game. In this case, the Kid cannot be faulted for taking offense with calls that even the replays supported. The digital age has made it that much harder to get away with bad calls. Though, in a game like Football, bad calls are all but expected. Snap judgments are an essential element of the game. More importantly, every fan wants to watch a game in which his team dominates and where every call made favors their side. However, some fans have been known to bury their heads in the sand, railing against every call that doesn’t favor their side, even when the replay clearly justifies referee’s decision.

While bias is expected in sporting events, Football would greatly benefit from more fans prioritizing the integrity of the game as a whole over their own biases towards their team. True football fans rarely emerge, those men and women who understand the rules of the game and who will praise opposing teams that thrill and entertain even when the tide has turned against their own teams.  NFL fans that are willing to accept when they are wrong and who have realistic expectations, this along with respecting the game as a whole more than the team they love, are a rare commodity. But they are the sort of fan the NFL should endeavor to nurture for the sake of the game.