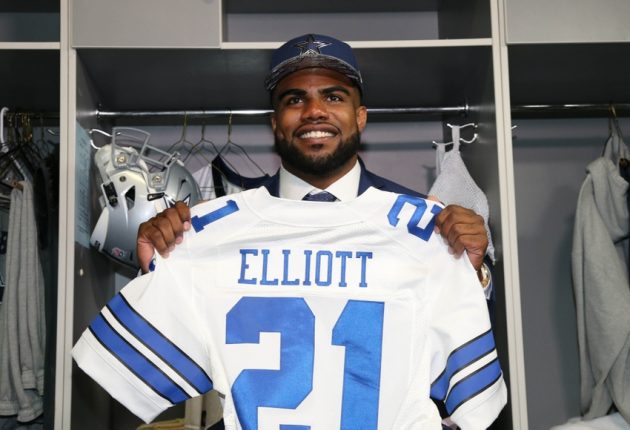 A running back hasn’t won NFL Offensive Rookie of the Year honors in back-to-back seasons since 2001-02. But the Dallas Cowboys’ Ezekiel Elliott is the -125 favorite on NFL picks to be the second straight tailback to do so in 2016.

The Next Emmitt Smith?

Some people were rather surprised that Dallas made Ohio State’s Elliott the first running back off the board with the No. 4 overall pick in this year’s draft. It wasn’t a knock against Elliott, who some have called the best running back prospect to enter the NFL since Adrian Peterson. It’s just that Dallas already had two pretty good veteran running backs on the roster in Darren McFadden and Albert Morris. McFadden rushed 239 times for 1,089 yards and three scores last year, his first with Dallas. Morris was signed a free agent from the Washington Redskins. He rushed for 751 yards and a score last year and put up 1,613 yards as a rookie in 2012.

Another reason some experts were surprised that Dallas took Elliott was that the Cowboys had such huge glaring holes on defense. But the Cowboys want to get back to pounding the ball on the ground like they did in 2014 when Dallas won the NFC East with a 12-4 record and were a questionable call on a Dez Bryant non-catch from upsetting the Green Bay Packers to reach the NFC title game. The Cowboys had the leading rusher in the NFL that year in DeMarco Murray, but he left for free agency after that. Plus  Dallas officials figure that a great ground game will help control the ball and help keep quarterback Tony Romo healthy. He broke the same collarbone twice last season as the Cowboys sunk to 4-12, their worst record since going 1-15 under first-year coach Jimmy Johnson in 1989. Dallas’ last Offensive Rookie of the Year was running back Emmitt Smith in 1990. Of course he went on to set the NFL career rushing yardage record and is in the Hall of Fame.

The second-favorite on NFL picks is Los Angeles Rams quarterback Jared Goff at +700. The Rams gave up a fortune in draft picks to Tennessee for the No. 1 overall pick in the draft and took Goff out of the University of California. As things stand right now, Goff isn’t the team’s starter. That would be journeyman Case Keenum. But that’s not going to last long. The Rams play their first preseason game Aug. 13 at home against the Cowboys. Their first regular-season game is Sept. 12, on the road against the 49ers. Even if Goff does start Week 1, it’s not likely he will put up huge numbers this year because the Rams have a stellar young running back in Todd Gurley, last season’s Offensive Rookie of the Year. They also are pretty weak at receiver so the Rams will be running a lot. No team has had back-to-back Offensive Rookies of the  Year. A quarterback hasn’t won it since Robert Griffin III in 2012 and his career has gone downhill since.

Vikings receiver Laquon Treadwell is +1200 on NFL picks. He was chosen No. 23 overall out of Ole Miss. Treadwell entered draft day as many experts’ top wide receiver. Instead, he was picked behind Corey Coleman, Will Fuller and Josh Doctson. But Treadwell should start from Day 1. That said, the Vikings are also a run-first team with Peterson, the 2015 NFL rushing king.

Doctson, Coleman and Carson Wentz are all +1600 on NFL picks. Doctson, from TCU, went No. 22 overall to Washington. He’s not projected as a Day 1 starter as the Redskins have two pretty solid veteran receivers in Pierre Garcon and DeSean Jackson. If they keep both, that is. Coleman, from Baylor, was the first receiver off the board at No. 15 overall to Cleveland. He’s going to start from the get-go because the Browns had perhaps the NFL’s worst group of receivers in 2015. And Coleman will have RGIII throwing passes to him. The Eagles traded a lot of draft picks to Cleveland to move up to No. 2 overall in the draft and take Wentz, the quarterback out of North Dakota State. The Eagles say they don’t plan to use Wentz at all as a rookie as they have two QBs in front of him in Sam Bradford and Chase Daniel.

I believe the best value on the board is Giants receiver Sterling Shepard at +1800 on NFL picks. The Giants have been raving about the former Oklahoma star and he should see plenty of single coverage as the team’s starter opposite superstar Odell Beckham Jr., the 2014 NFL Offensive Rookie of the Year.

Steelers Fans vs. Regular Football Fans
Artie Burns Has To Learn Fast, And On The Job