Is Le’Veon Bell Worth $15 Million? The Steelers May Have to Decide If He Is 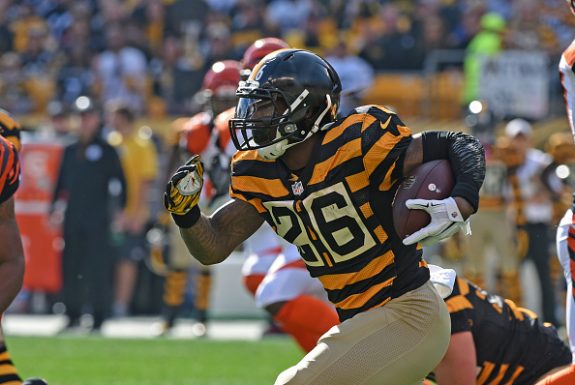 While Antonio Brown and Ben Rothlisberger have both been taken care of in the money department, there’s one player on the offense that still needs to get a new deal in place to make sure he’s happy and content for year to come.

The running back has had his last two seasons ended early due to injury, but is still one of, if not the most dynamic back in the NFL, and the Steelers clearly don’t want to lose him.

He’s set to make $1.3 million this season, the last of his rookie deal with the black and gold. The back is only 24 years old, and has his best football still ahead of him.

CBS Sports reports that the back wants to get paid – a lot – in his next deal, and right now he heads into 2016 as the 45th highest-paid running back.

So how did Bell come out and give what he’s looking for money-wise in his next deal? A rap song he wrote and performed called ‘Focus.’

The way the song plays out, Bell says the following line that basically speaks for itself – “I’m at the top and if not I’m the closest, I’ma need 15 a year and they know this.”

That’s a ton of money for any player to make, but Bell is no normal player, he’s one of the best playmakers in the game. He’s part of the one of the big three of offensive playemakers the Steelers have with Ben and Brown, and if the team loses him, it’s not like he’s going to be easy to replace.

That’s a question only the Steelers can answer, and you can bet if the back goes elsewhere, places like william hill promo 2016 won’t have the Steelers near the top of AFC with a good shot of making the Super Bowl.

Will Bell give the team a discount to stay in the only place he’s ever played? It may be necessary for him to remain with the Steelers long term.