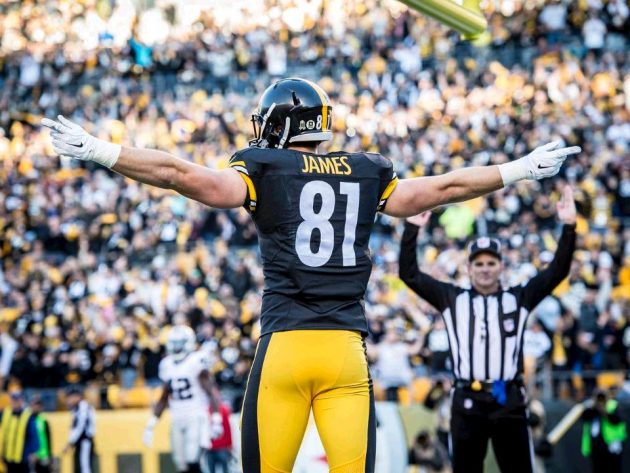 How does the Pittsburgh Steelers tight end hold up? This piece takes a look at each of them with definitive grades.

There are not a lot of stats to work with when analysing Jesse James as a pro as he is only in his second year as a pro. He, however, had a very stellar college career with around 78 total receptions and over 1,000 yards under his belt. The young lad from Penn St. is very happy to be with the Pittsburgh Steelers and has huge hopes to become a mainstay in the team.

He is already proving very active in the community with the $5,000 he raised for research. We expect him to also be a major design attraction on gaming portals like some of the others before him. So don’t be surprised if you find his face in use on PayPal bingo sites on gaming directories like www.newpaypalbingo.com. He certainly has the celebrity pulling power to win customers for diverse industries.

In his short career, he has only been able to find the red zone once but if his past performances are anything to go by, there is a huge chance of him replicating his successes in the coming season. Giving him a B wasn’t an easy decision, especially when you take into consideration the minimal experience he has had in the NFL. However, his potential means the B is certainly not outlandish.

As the next season approaches, Steelers fans will see Ladarius Green wearing another uniform. He is slated to take over the number 80 shirt. It remains to be seen how he holds up following his ankle surgery done on May 25th. Last season, however, he was vital for the team, contributing 429 yards and 63 targets. He is still young so even if the injury hampers him early on, he can still rebound to play a huge role in the new Steelers team. Being 6 foot 6, he will be the perfect target, especially as it concerns blocking around the red zone.

With the retirement of Heath Miller, Matt Spaeth is now the Veteran tight end on the team. There is no doubt that Matt will see a lot more playing time in the 2016 season. This will allow him add more to the 3 targets he racked up in the 2015 season. He could have added more if he hadn’t been injured towards the end of 2015 in week 9.

He should be a good mentor for some of the younger guys both on and off the pitch. Expecting him to hit his 2008 levels may be unrealistic but he should be able to do a whole lot more than he did last season. He is far from your average superstar tight end but can chip in a fair bit to control games and get decent first downs at important periods of the game. The jury is out but he could become the next safety blanket for the offense.

These are just my personal ratings, so feel free to offer a counter opinion in the comments section!