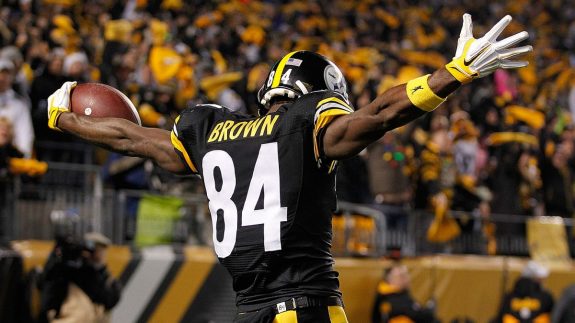 The Steelers and Antonio Brown are close to getting a deal done, one that will restructure his current contract. Adam Schefter of ESPN is reporting the deal should be announced shortly.

Steelers and Antonio Brown on verge of a restructured contract expected to be completed shortly, per league source.

This is obviously great news for the Steelers and their fans, as there was already some nervous feelings about Brown only having two years left on his deal.

The wide out has been pushing for an extension, while the Steelers have been saying they won’t negotiate as of now.

It remains to be seen what type of reworked deal Brown gets, as it will be interesting to see if it involves more money or a bigger up front bonus.

He is the best wide out in the game, end of story, and the Steelers should make sure that he’s happy as the team looks to make a serious run at the AFC and Super Bowl this season.

Right now Brown is ranked 18th among wide receivers in terms of average annual compensation ($8.4MM/year), a joke considering how valuable he is to this team. The Steelers appear to be ready to make him happy, and hopefully ready for Brown to stick around for years to come.