Steelers Beaten Every Which Way, Embarrassed By Eagles 34-3 in Philadelphia 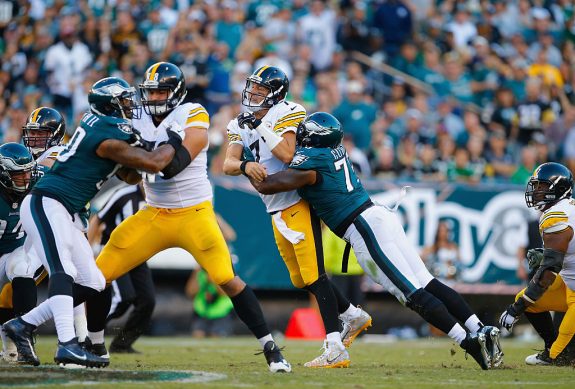 The Steelers played Sunday’s affair with the Philadelphia Eagles like they should have never gotten off the bus.

The team was beaten in every facet of the game like never before under coach Mike Tomlin, who should be ashamed and embarrassed at his coaches and players for the way the team performed.

The result was simple, a 34-3 butt whipping at the hands of the Eagles who rolled out a rookie quarterback who had beaten two bad defenses.

With little to no pressure minus a few plays from James Harrison, Carson Wentz picked apart the Steelers defense to the tune of 302 yards and two touchdowns with a quarterback rating of 125.9.

His counterpart on the other hand, Ben Roethlisberger, was part of an offense that looked nothing like the team that beat up the Redskins in the opener and last week did enough at home against the Bengals to get the team to a perfect 2-0.

Roethlisberger 24-for-44 for 257 yards and a pick for a 62.4 QB rating. He also was sacked four times for 35 yards, and was under pressure just about every time he threw, just like the outing in Philly back in 2008.

There’s no sugar coating this loss in any way. The Steelers were manhandled as much as any Steelers team we’ve seen in the last decade, and that has to be a concern.

Sure it’s just one game, but the result was so totally lopsided, and the fact the team suffered a number of injuries on defense has to have Steeler Nation wondering just what the heck is going on?

I also don’t think I’ve ever seen a Tomlin team come out of the halftime locker room as ill prepared as this one was on Sunday.

With the team down 13-3, the Eagles put the game away with relative ease, scoring 21 third quarter points with a big play by Wentz to Darren Sproles, running the ball effectively, and making smart plays while the Steelers seem totally dazed.

The Steelers have a week to think about this complete meltdown, and will get the spotlight of National TV the next time we see them when they play the Kansas City Chiefs on Sunday night football next Sunday.

For now, what happened Sunday is totally unacceptable in every fashion. Let’s hope it turns into a bump in the road on the way to a successful season.