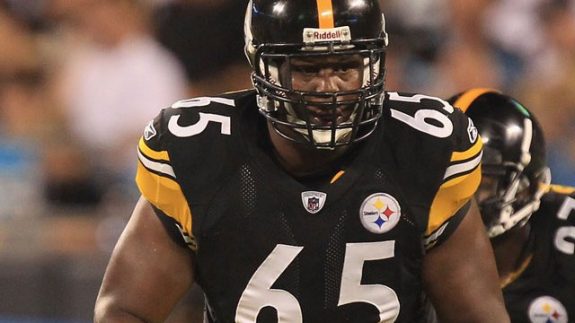 The Steelers have already put their huge bounce back win over the Chiefs behind them, and are getting set for an interesting game against the New York Jets on Sunday, a team that has struggled out of the gate at 1-3 and is talking about a possible quarterback change with a struggling Ryan Fitzpatrick not getting the job done.

Today Mike Tomlin chatted with the media, and there was special focus on the amount of injuries to the Steelers that the team had to overcome in the game last week, and will again have to deal with this week.

One player on the offensive line that is going to be questionable is Marcus Gilbert, who got good news on an an MRI on his injured foot/ankle.

Monday Gilbert was in the Steelers facility wearing a cast and walking with the aid of crutches, which puts him at playing Sunday seemingly unlikely.

Ryan Harris, who came in for Gilbert, is also questionable for the game according to Tomlin, meaning the team may be looking for an offensive lineman in the next 24 hours.

There was some good news on the offensive line, as Ramon Foster may be able to get back on the field according to Tomlin. He missed the game Sunday with a sternum injury.

As far as the other injuries, wide out Eli Rogers is out again, safety Robert Golden (hamstring) and linebacker Ryan Shazier (knee) may be able to play depending on their ability to practice this week.

Rookie safety Sean Davis, who dressed but did not play Sunday, had a back problem last week, but his injury or availability to play didn’t get addressed by Tomlin during Tuesday’s presser.