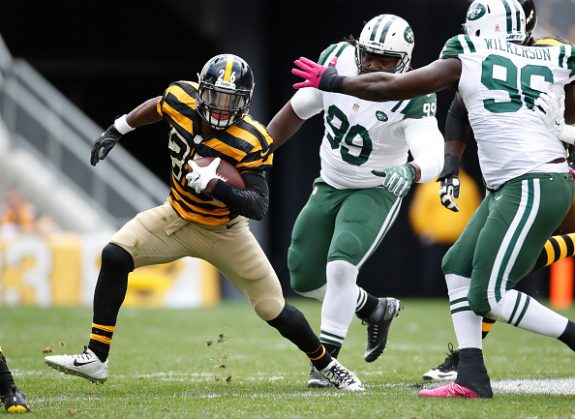 The Steelers and Jets have been nip and tuck all afternoon at Heniz Field, with the Steelers holding a slight 14-13 edge over the Jets at the half.

Ben Roethlisberger has 194 yards in the air and two scores, including an early big score to Sammie Coates that got the Steelers going and up 7-3.

The Jets have not gone away quietly, as a TD pass from Ryan Fitzpatrick to Brandon Marshall gave New York a 13-7 lead, but the Steelers responded with a TD drive to take the lead back with Jesse James catching the one-yard score.

Here’s some thoughts on the first half from Heinz:

* A week after the team put more pressure on Chiefs QB Alex Smith than any other week we’ve seen in 2016, the Steelers D is back to being a lot more passive when it comes to pressure against Ryan Fitzpatrick. The Jets QB has shown some footwork getting out of the little pressure the Steelers have put on, but it would be nice to see Keith Butler and the D get some more pressure in that second half to try and force some turnovers.

* Easy to say this now but didn’t like the fake field goal at all in the second quarter in what was at the time a one-point game. Chris Boswell is one of the more accurate kickers in the NFL this season, and I didn’t think the timing of the play was right when they tried to pull it off. Sure if it works we’re all saying just the opposite, but at the time of the call and where the game was at, didn’t think it was a necessary gamble.

* Good Sammie – Bad Sammie. Coates showed what he could do when he pulled in the long touchdown to start the game and give the Steelers an early 7-6 lead. He also though dropped what could have been a score in that two-minute drill, and then dropped a one-yard score before Ben went to James for the go-ahead points. Not sure if it’s focus or just being young, but no excuse.

Jets at Steelers NFL Week Five Inactives Announced
Steelers Pull Away; Top the Jets 31-13 to Move to 4-1 on the Season and Lead the AFC North