Steelers Pull Away; Top the Jets 31-13 to Move to 4-1 on the Season and Lead the AFC North 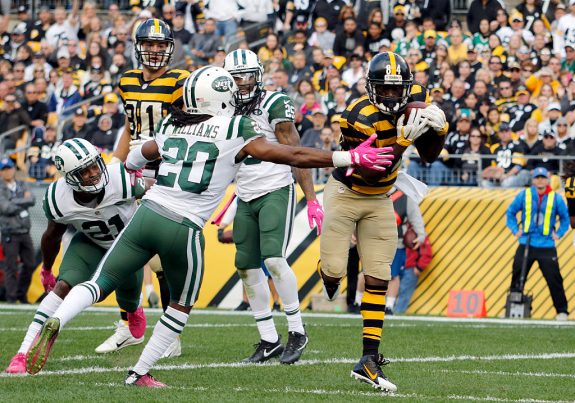 It took a little longer than they wanted, but the Steelers Sunday finally did enough on both sides of the ball to put away the pesky New York Jets, walking away with a 33-13 win to put them at 4-1 on the season.

Ben Roethlisberger, coming off a five touchdown outing last Sunday, threw for 380 yards and four touchdowns, two to wide out Sammie Coates, and one each to tight end Jesse James and wide out Antonio Brown.

Coates dropped a couple passes, but Ben was bent on getting him the ball, and he ended the day with six grabs for a career-high 139 yards and two scores, including a 72-yard score that put the Steelers up 7-3 early.

New York to their credit made it a lot more interesting than Steelers fans wanted, as they led 13-7 after Jets wide out Brandon Marshall pulled in a touchdown pass from QB Ryan Fitzpatrick.

On the day Fitz was 25 of 38 for 265 yards and a touchdown, but in the second after after the Steelers got up 14-13, they put the clamps on the Jets offense, and held them to zero second half points.

The Steelers 3 ‘B’s’ all had good days, with Ben throwing for four scores, and running back Le’Veon Bell putting up 154 yards of total offense.

He was more effective catching the ball, pulling in a career-high nine receptions.

UPDATE from our friends at BetPhoenix.

Super Bowl 51 is steamrolling towards us. The game kicks-off on Sunday, Feb. 5, at NRG Stadium, home of the Houston Texans. Reliant Stadium’s lone other Super Bowl was one of the wildest in game history, with the Patriots knocking off the Panthers 32-29 in Super Bowl XXXVIII. (We’ll have to see if the roof will be closed this time.) Now let’s find out who are best betting picks to win Super Bowl 51 are. Read more…

Antonio Brown caught nine passes for 78 yards and a touchdown, but was told to remove his shoes after one quarter giving props for boxer Muhammad Ali or he would be removed from the game, and also didn’t do any sort of touchdown dance after his TD to extend the Steelers lead.

The offense was effective after they went down 13-7, as they drove the field in the final minutes of the half and scored on a Ben to James TD in the final first half seconds to take back the lead for good at 14-13.

The defense then took over, as the Jets were held to just 2-for-11 on third downs, and overall the second half they could muster little as the game was still in doubt until the Steelers scored on Brown’s TD to make it 24-13.

The black and gold now will wake up in first in the AFC North, as Baltimore lost for the second week in a row, falling at home to the Washington Redskins 16-10.

At 4-1, the Steelers have a great shot to get to 5-1 next week as they travel to South Florida and Miami to play the Dolphins, who lost at home Sunday to the Tennessee Titans.

First Half Thoughts of the Steelers 14-13 Lead Over the Jets
The Last Steelers 4-1 Start – the Super Bowl Season of 2010 – Can They Stay on that Path?