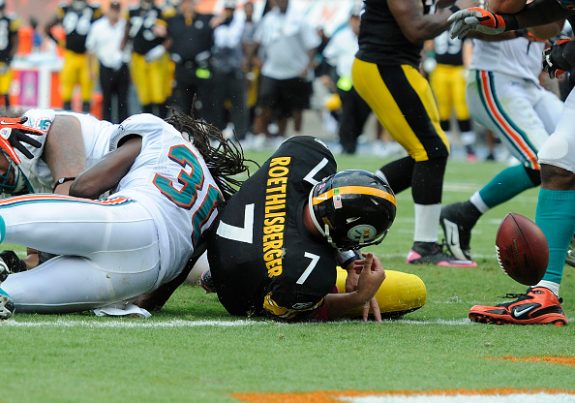 It’s a game that the Steelers probably should have lost, but going back it was a game the team needed on their way to eventually making it to Super Bowl XLV in Dallas at the end of that season.

The game we’re talking about is the Steelers matchup between the Steelers and Dolphins down in Miami back in October of 2010 – a game that if you watched live, you probably couldn’t believe your eyes.

The matchup came down to a late officiating call by Gene Steratore after it looked clear as day that Steelers QB Ben Roethlisberger fumbled the ball in the end zone, only to have it recovered by the Dolphins which would have sealed a win for them that warm afternoon in Miami.

Instead, after what seemed like a five-hour delay, a call was made that no one seemed to understand. The officials said they had no clear evidence on who recovered the ball in the end zone, and down 22-20, the Steelers got a chance to kick a short field goal for the win.

Dolphins fans were not happy to say the least, but the Steelers were just happy to get out of Miami with a win.

Today we give you some of our official game story from Steelers Gab that day, and a link to check out the rest of it! Enjoy!

The ruling allowed Jeff Reed to kick an easy 19-yard field goal to give the team the one-point win and keep then in first place in the AFC North.