Report: Steelers QB Ben Roethlisberger Has Torn Meniscus in Knee; To Have Surgery 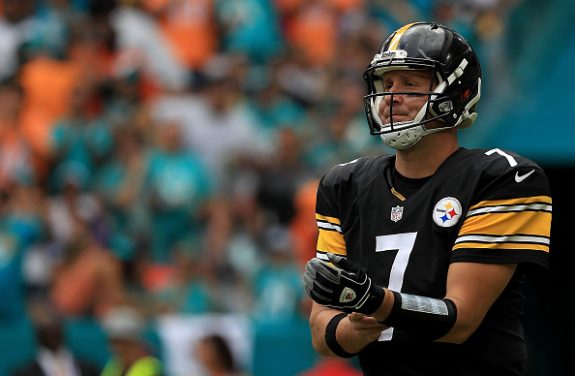 While it’s not a season ending injury, the news tonight on Steelers quarterback Ben Roethlisberger is not good.

Ron Cook of the Pittsburgh Post-Gazette reports that Big Ben has a torn meniscus in left knee, and will have surgery to repair the damage on Monday morning.

Steelers quarterback Ben Roethlisberger has a torn meniscus in left knee and will have surgery Monday morning. No timetable for his return.

The time frame for recovery for the surgery varies, but the Cleveland Clinic website states the following about the recovery for such a surgery:

Following surgery, there is a recovery time of up to two weeks to allow time for frequent physical therapy and appropriate treating of the knee to ensure a quick return to normal activity. As part of physical therapy, patients will be taught exercises, in addition to having guided therapy. Patients will continue to receive physical therapy three times per week after they are discharged from the hospital. The length of the rehabilitation period depends on the patient’s condition and recovery progress. If a meniscal repair is done, the recovery time and rehabilitation period may be extended – up to six weeks in a knee brace or with crutches.

Last season Roethlisberger missed four games after suffering a sprained MCL and a bone bruise in a win early in the season in St.Louis, and then was injured again later in the season against the Oakland Raiders, but didn’t even miss a game as he came in after Landry Jones was injured and set a record for most yards thrown in a game for a QB that didn’t start the game with 375 yards.

Back in 2005 Roethlisberger missed four games due to various knee injuries after he took a shot during a Monday night game in San Diego against the Chargers. That season he missed one game, and then three more later in the season.

So the thought if it’s four weeks is for him to be back for the Cleveland game on the road on November 20th, or if it’s longer he may make it back for Thanksgiving night.

No matter when, the bottom line is the team has to get Landry Jones ready to be the starter, and likely will look to have Zach Mettenberger ready to go as his backup starting Sunday against the dangerous Patriots.