Steelers Vised in Miami by Dolphins; Fall to 4-2 Following 30-15 Beating 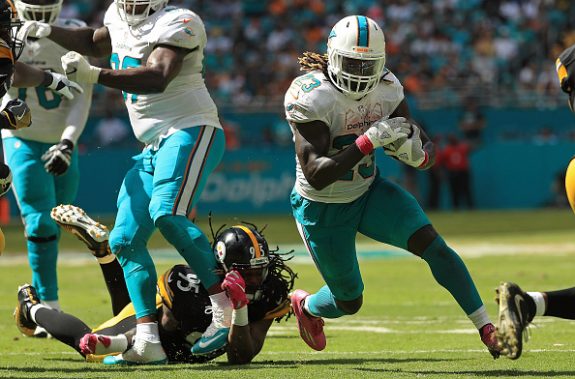 The Steelers latest effort in South Florida was much like the one three weeks back in their last road game in Philadelphia – a game that ended the same way – with a loss.

Inability to stop the run, an awful game on offense, and an injury to their franchise quarterback spelled doom on Sunday, as the Steelers dropped to 4-2 with a 30-15 loss to a Miami Dolphins team that had won just one game in five tries.

Ben Roethlisberger injured his left knee in the first half and while he missed some time he did return in the second half, but was mostly ineffective going 19-for-34 for 189 yards with a touchdown and two interceptions.

The offense as a whole did little, scoring an early touchdown on a 60-yard reverse by Darrius Heyward-Bey and getting the two-point conversion, and then not scoring again until the game was basically out of reach with just a minute left in the game when Roethlisberger hit newly inked WR Cobi Hamilton with a 23-yard score.

Not that it really mattered, but the Dolphins put the game away when Jay Ajayi raced 62 yards to end the terrible defensive effort by the black and gold.

Without starters Cam Heyward and Ryan Shazier, again the pass rush was nowhere to be found, and the run defense was the worst it’s been in a very long time.

Ajayi ran through the Steelers for over 200 yards, ending the afternoon with 204 yards on 25 carries and the touchdown icing on the cake in the final minute.

Missed tackles, and just out and out lazy tackling was the signature of the Steelers defense all afternoon. They didn’t do much better in the pass game against Dolphins quarterback Ryan Tannehill.

The often maligned quarterback was 24-for-32 for 252 yards and hit a couple downfield plays in the first half that wound up being big plays as the Dolphins rallied from down 8-3 to eventually take a 16-8 halftime lead.

The Steelers run game against the worst run defense in the NFL never got going minus Heyward-Bey’s 60-yard run. Le’Veon Bell ran for just 53 yards on 10 carries, and DeAngelo Williams had just 10 yards on three carries.

The week should be awfully interesting with the loss, combined with the injury to Ben’s knee, which will likely be shrugged off since he was able to return in the second half.

The Steelers still have control of the AFC North, as the Bengals lost to the Patriots, and the Ravens fell in New York to the Giants.

Next week the Steelers have a huge home game as they will play host to the Patriots at 4:25pm.

First Half Thoughts From the Steelers 16-8 Disaster in Miami
Report: Steelers QB Ben Roethlisberger Has Torn Meniscus in Knee; To Have Surgery