Roethlisberger and Heyward Ruled Out for Sunday Against Patriots 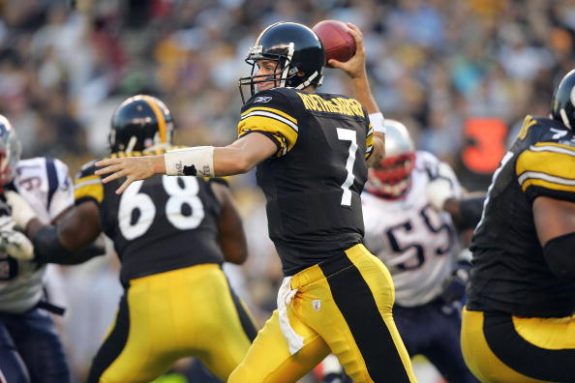 With a home game looming against the 5-1 Patriots on Sunday, today coach Mike Tomlin spoke to the media, and as expected ruled out already two key players for their contest against Bill Belichick, Tom Brady and company.

The two players out for sure Sunday are quarterback Ben Roethlisberger and defensive end Cam Heyward, two players that the team will very much miss.

Roethlisberger underwent outpatient surgery on the meniscus in his left knee Monday, and depending on how quickly he can recover will determine the amount of games he will miss.

The Steelers have the Patriots at home Sunday, then will have the bye week before three straight road games – at Baltimore, at Cleveland and at the Colts on Thanksgiving night.

Other players who have missed games in recent weeks have a chance to play, Tomlin said. Those players include right tackle Marcus Gilbert, inside linebacker Ryan Shazier and receiver Markus Wheaton.

None of them played in Sunday’s 15-point setback to the Dolphins down in Miami.

Could Ben Roethlisberger Miss Just One Game Following Knee Surgery?
Roethlisberger Puts the Brakes on Thoughts on a Fast Return from Surgery