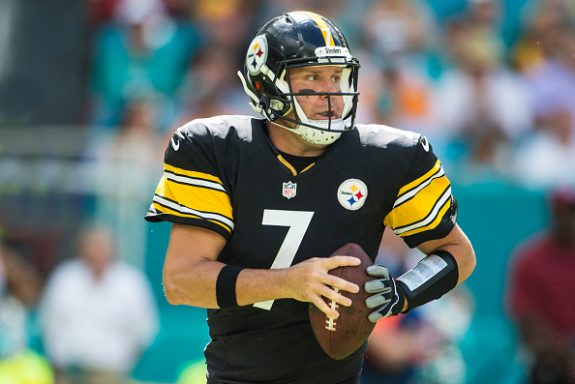 It sounds like before Steelers fans should not get too excited about a quick return for quarterback Ben Roethlisberger, and the thought of him missing just one game may be a little far fetched.

Jeremy Fowler of ESPN wrote this morning that Big Ben told the Post-Gazette’s Ron Cook that the injury and surgery that took place Monday was a lot more than just a ‘simple’ meniscus tear.

Here’s what Fowler stated about the injury situation.

Ben Roethlisberger told the Pittsburgh Post-Gazette’s Ron Cook that the doctors said his “knee looked good” but had buildup from last season’s bone bruise, jeopardizing his chances to return for Week 9 against Baltimore. “But there’s no way to put an exact timetable on it,” he said. “It depends on my pain and how I feel.”

After the Baltimore game, the Steelers have two road games in the course of five days, as the following Sunday they play at Cleveland against the currently winless Browns, and then on Thursday that week they will play at Indianapolis on Thanksgiving.

Maybe a more realistic thought for Ben is to be back by the time we’re all eating turkey on Thanksgiving. As the quote says, it’s all about how Ben feels and how much pain he can handle.