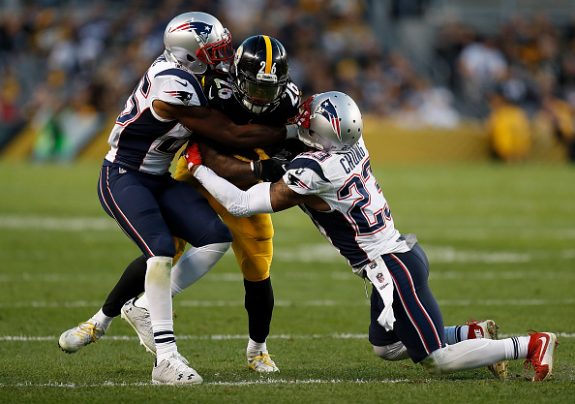 In the end, not having their franchise quarterback along with too many field goals instead of touchdowns, combined with some odd play calling was enough to see the Steelers drop to 4-3 on the season.

The Patriots did more than enough to pull away for a 27-16 win on Sunday at Heinz Field, and while Landry Jones was able to keep the team in the game, a costly first quarter interception and the inability to score touchdowns was a big part of the Steelers undoing.

Jones’ first start of 2016 was a learning experience, as he made his share of mistakes, but also made some plays, enough to have the team down just four at the half at 14-10.

He had the Steelers down 20-16 in the fourth quarter after a Chris Boswell 44-yard field goal with 14:49 to play, but the Patriots, as they usually do in Heinz Field, marched right down the field and put the Steelers hopes of a win away with LeGarrette Blount’s second score of the game to make it a 27-16 affair.

The Steelers had chances early, as a first quarter fumble recovery by the Steelers was wasted as Jones thew a bad end zone interception to Malcolm Butler forcing a ball to Antonio Brown ended any chance of an early Pittsburgh lead.

Tom Brady and the Pats marched down the field after the pick, as he neatly went 80 yards in 13 plays, hitting James White with a 19-yard TD pass to give the Patriots a 7-0 lead.

New England went up 14 on their next drive, as this time they went 84 yards in 11 plays, with Blount going over from three yards out with 10:58 to play first half making it 14-0.

The Steelers finally got things going, as Jones hit a big play to Brown from 51 yards to set up an eventual touchdown pass to Darrius Heyward-Bey from 14 yards out to make it 14-7.

They had a shot to make it 14-10, but Chris Boswell missed a field goal, this also after a holding call on a touchdown pass would have tied up the game.

In the third quarter, the Steelers did draw it to 14-13 after Boswell hit a 46-yard field goal at the 8:49 mark, but as New England usually does, they quickly respond.

This time it was the passing of Brady, who quickly drove the team 75 yards in five plays, hitting Rob Gronkowski from 36 yards out to make it a 20-13 game after a missed point after.

Again though the Steelers couldn’t convert seven, as they drove down the field in 12 plays, but had to settle for another Boswell field goal to make it 20-16.

That’s as close as the Steelers would get, as the Pats put the game out of reach with a 75-yard drive right through the Steelers D, with Blount going over for his second score to make it 27-16.

The Steelers did have a shot to get closer after recovering a fumbled punt, but after they couldn’t get a first on 4th-and-2, Mike Tomlin sent out Boswell for a 54-yard field goal attempt, which wasn’t even close, ending the Steelers last good chance of the day.

Jones was 29-for-47 for 281 yards with the touchdown and pick, but overall the offense had too many mishaps, and there wasn’t enough rhythm, and they had to settle for too many field goals.

That may work against teams like the Browns, but not against Brady and New England.

About the only good news is that the Ravens and Bengals are still a game each out, as the Ravens lost to the Jets on the road, and the Bengals beat the Browns at home.

The Steelers are on the bye and will come back to play the Ravens in two Sunday’s on the road in Baltimore.