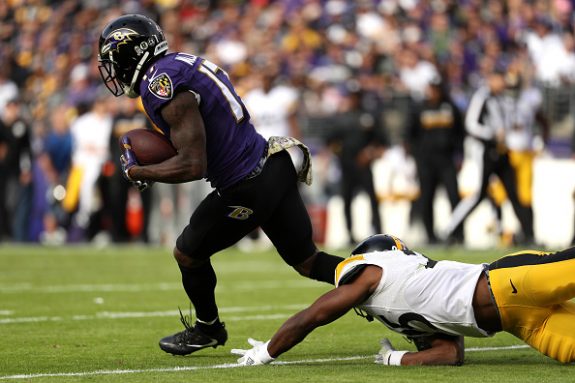 Usually when your team is on the road and only trailing by a touchdown you can come up with some positive things to say – but not today. The Steelers, coming out of the bye, look 100 percent awful, with a QB that is not ready to play, a team that can’t seem to tackle when it counts, and way too many penalties.

So with that, here’s the good news – it’s only 10-0, and the Ravens don’t exactly look like they are ready to run away with this game anytime soon.

Can the black and gold make a comeback? Doesn’t look good, but nevertheless let’s look into the forgettable first half and what to look for in the second 30 minutes.

The Steelers offense was, to put it nicely, terrible. They did nothing to think that even down 10 they would do enough to come back and make a game of this in the second half, but with Ben I guess you just every can tell. Overall the offense put up 62 yards, to 232 for the Ravens. That’s a whopping 2.8 yards per play, which by the way sucks. Ben Roethlisberger isn’t close to 100 percent, and on the day has thrown one completion to a wide out and has 50 yards total passing. The Steelers have 16 yards rushing on 10 carries, and their long rush of the day is four yards. This is worse than a preseason game.

It makes me want to throw up to see how many missed tackles this team has had this season, and the 95-yard pass play to Mike Wallace was a prime example, as he ran past Artie Burns and then mouthy Mike Mitchell failed to make the tackle (something we’ve seen way too often), on his way to racing the distance. While you can blame those two, there’s been plenty of others that share the blame, with the Ravens run game doing enough, going for 31 yards, which is not good, but better than the 16 yards the Steelers run game has put up. At this point of the season (or any point for that matter) there’s no excuse for missed tackles.

The gameplan thus far has been awful, the play of the defense has been okay, but the offense has been putrid. A team chock full of talent with Pro Bowl players and playmakers all over the place shouldn’t have these types of games, and even if one player isn’t having a big day, another should be able to step up. Today that’s not been the case, as Antonio Brown has been held to one catch, and Le’Veon Bell and the run game can’t get going. This team is 30 minutes away from going from 4-1 to 4-4, and with 7-1 Dallas coming to town, it might be worse before it gets better.