Steelers Fall in Baltimore; Fall to 4-4 in 21-14 Beatdown by Ravens 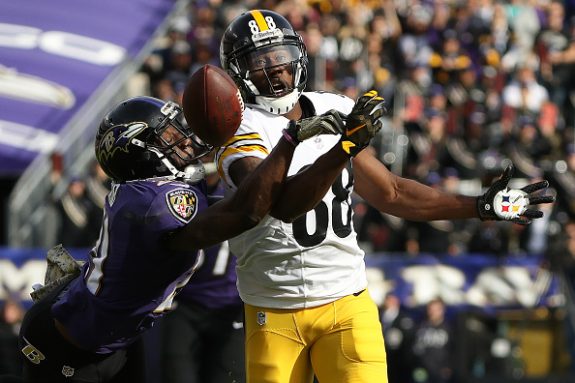 The final score may have looked good, but if you watched the game you realize just how poorly the Steelers played on Sunday.

The Steelers should have never gotten off the bus in Maryland, as the Ravens laid another beatdown of their rival in Baltimore, beating the Steelers 21-14.

The hope was with a returning Ben Roethlisberger the Steelers offense, which showed sparks but couldn’t score enough against the Patriots two weeks ago, would get things going against the Ravens, but instead they went backwards all day.

The numbers by the Steelers offense were bad, they put up more yards than the Ravens (277-274), but they were so ineffective over the first three plus quarters by the time they came back it was way too late.

Roethlisberger went 23-for-45 for 264 yards with a touchdown throwing and rushing, plus an interception.

The run game never got going, as they rushed for just 36 yards with Le’Veon Bell running for just 32 yards on 14 carries.

The defense made their mistakes, as they gave up the longest pass play in Ravens history, with Mike Wallace burning Artie Burns and Mike Mitchell for a 95-yard score in the first quarter with 1:07 to play to make it 7-0.

The Steelers defense did tighten up, holding the Ravens to a pair of Justin Tucker field goals to make it a 13-0 Baltimore lead at the half.

The second half again saw the defense do their job, holding the Ravens to zero points, but this time Baltimore got in the end zone on special teams.

Jordan Berry’s punt was blocked and Ravens’ Chris Moore picked it up and jogged into the end zone to make it a 19-0 game. They went for and got the two, making it a 21-0 game with 13:44 to play.

The Pittsburgh offense finally got going, as on the next drive they finally got the ball to Antonio Brown, who had just one first half catch, and eventually he scored on a 23-yard touchdown to make it 21-7 with 8:38 to play.

After the Steelers D continued to play well after their early letdown on the Wallace touchdown, and held the Ravens to two field goals after their first TD.

They held the Ravens again, and once again Ben and the offense went down for a score with Roethlisberger going in from four yards out with :48 to play to make it a seven-point game.

Then one of the wackiest plays in Steelers history took place, as kicker Chris Boswell attempted an onside kick, but trying to do a volley kicked the ball off the back of if his own leg, and the ball went to the Ravens who took a knee as the game ended.

The Steelers now at 4-4 have another tough task next week as they take on the 7-1 Dallas Cowboys at home next week at 4:25pm.