Steelers at the Crossroads; Is the 2016 Season Slipping Away After Three Straight Losses 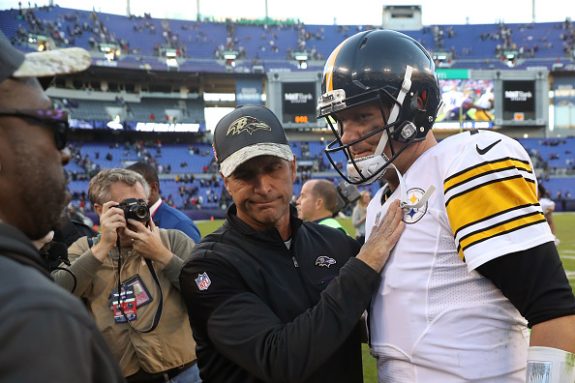 October 15th the Steelers looked like a team that had Super Bowl dreams and one that at the time could back up with the talk with what was to date a 4-1 record with just one slip up at the time to the Philadelphia Eagles.

They had after the loss to the Eagles pounded the Chiefs at home on a rainy Sunday night and dispatched the New York Jets at Heinz Field, and things for the team were sailing smoothly.

Then, a game against the Miami Dolphins took place, and just like that, it seems the 2016 season was thrown up in flames.

The team lost their franchise quarterback, even if it was just for two games, and add to that the fact they seemed to lose their way and their swagger.

They haven’t won since, and less than one month than it looked like they were a top contender in the AFC, they not only have lost their way but don’t even lead their own division, tied with the Ravens who just beat them 21-14 in Baltimore Sunday.

Now, with a home game against the 7-1 Dallas Cowboys Sunday at home, the 2016 season is clearly on the brink, and there’s a lot of concern of the wheels totally coming off if the team can’t find a way to stop a Dallas team that is on a roll with seven straight victories.

Mike Tomlin’s era as head coach of this franchise has had moments of despair, but it feels like no moment since he took over in 2007 feels as unpredictable as this one.

On one hand, playing at home has always been the Steelers formula for getting back on track, but this team as of late has had so many issues, just assuming because they are playing at home as the turnaround is right now not logical.

They have an offense that can’t for whatever reason run the ball, even with Le’Veon Bell and DeAngelo Williams, they can’t develop anyone other than Antonio Brown to catch the ball at wide out, and their quarterback less than a month from surgery just didn’t look right Sunday.

Then there’s a defense that while they played well on Sunday allowing just one touchdown and two field goals, they also allowed a 95-yard touchdown that they should still to this day be utterly embarrassed about.

Their first-round pick, corner Artie Burns, was burned by former Steelers wide out Mike Wallace, and then to add insult to injury, Mike Mitchell, he of usual celebrations after every play he may make, didn’t show much effort as he failed to tackle Wallace, and allowed him to race the distance to give the Ravens the lead at the time.

The rest of the day Sunday the Steelers D did a nice job, but they were not able to do enough to turn the game around, like get a game changing turnover.

Then there was the special teams, which allowed a blocked punt for a score to make it 21-0, and then Chris Boswell’s comedic attempt at an onside kick late in the game ended an all around laughable effort.

It was the type of effort that sadly Tomlin teams on the road has seen more than once. The Steelers have been flat out awful against under .500 teams on the road with Tomlin, and it gets more and more frustrating with each loss.

Even a win Sunday against the Cowboys may not be enough to get this season turned around. Sure the team will travel to Cleveland to play the currently winless Browns the following week, but then have a short turnaround against a Colts team on Thanksgiving that is exactly the type of trap games that Tomlin teams have become known to lose.

Until this offense gets back on track, running the football, and finding someone other than Brown to catch passes, they may not be all that much better than they showed Sunday.

Guessing how this season will go is like guessing the outcome of a slot machine at places like spelautomater.se.

The pressure is on the coaching staff and this group of players to not let this season slip away. Right now the 2016 Steelers are in critical condition.

A loss Sunday and they may be on life support, a win, and hopefully they will start to come out the coma they look like they have been in the last three weeks.