Steelers Don’t Make It Easy; But Break Losing Streak in 24-9 Win Over Cleveland 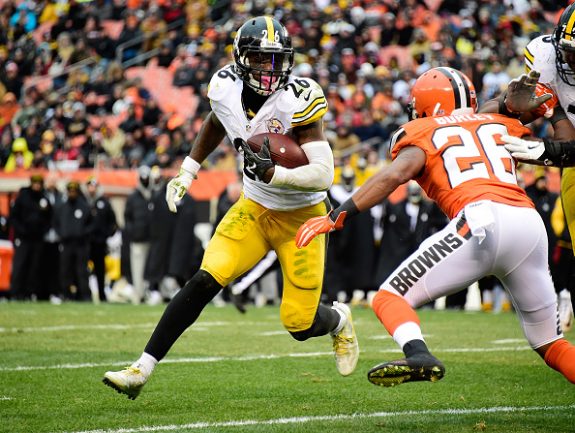 The Steelers didn’t play their best game by far Sunday, but their quality of competition was such they could get away with it.

The black and gold broke a four-game losing streak in Cleveland, sending their one-time rival Browns to 0-11 with a 24-9 win that probably could have been a lot worse based on how the Steelers dominated most of the afternoon.

They held the ball for over 20 minutes in the first half, but led it 14-0, and that was only because they got a couple chances with the clock at triple zero to eventually get a one-yard touchdown run from Le’Veon Bell.

The Steelers back was a force, going for 146 yards on 28 carries, and he also had eight grabs for 55 yards. He helped the offense have four drives of 10 plays or more, the only issue was three of those drives they settled for field goals.

Ben Roethlisberger was 23-for-36 for 167 yards, and didn’t throw a pick or TD, but also was kept clean as the Browns defense never recorded a sack on him.

The Steelers defense put up huge numbers in sacks, as they sacked Browns starter Cody Kessler four times, and then when he was hurt backup Josh McCown came in, and he was also sacked four times.

The play that basically ended the game came with the Steelers leading 17-9, and they punted to Cleveland with about four minutes to play.

On second down, Ryan Shazier got to McCown at his goal line, and stripped the ball. Javon Hargrave recovered it in the end zone for the score, and it gave the Steelers a commanding 24-9 lead.

The win puts the black and gold at 5-5, and they are tied with the Ravens for first after Baltimore’s loss to Dallas.

The Steelers will play at Indianapolis in just four days on Thanksgiving night.