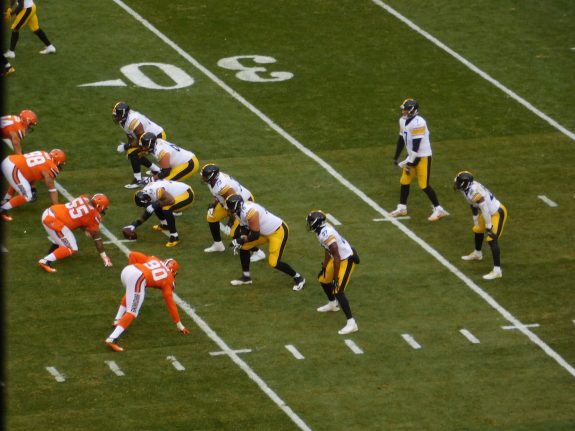 It’s not a huge shock by any means that the Steelers have a lead over the Browns 14-0 in Cleveland at the half, but maybe the surprise is how in complete control they are of this game, but have not had the ability to put up more points against a team that has yet to win a game this season.

Here’s some thoughts on the first half, and how the black and gold should be on cruise control as they get back to .500 and break their four-game losing streak.

Le’Veon Bell was in complete control in the first half, with 85 yards and a score rushing, and another 7 grabs for 50 yards. The Browns have been basically powerless to stop him at this point, and there’s no reason for the Steelers not to keep feeding him in the second half. Bell put on a clinic in the two long drives, and with the weather and wind being what it is, the Steelers should just keep ringing the Bell early and often in the second half as they get the ball first.

On the Browns first possession, the Steelers gave up a 36-yard pass play from Cody Kessler to Terrelle Pryor, and that’s been about it for Cleveland’s offense, who put up a whopping 14 yards the rest of the half. If Cleveland is even going to make this anywhere near close, it’s going to be via the big play, and the Steelers have to make sure not to get overconfident and allow themselves to let Cleveland have any sort of breath of life via a big play, in any phase – offense, defense or special teams.

One of the keys was ‘foot on the throat’ when we did our prediction Saturday, and the Steelers have a shot with their first possession in the third quarter to do just that. They actually are somewhat lucky to be up 14-0 after Ben held the ball too long on what could have been the last play of the first half. Instead, the Steelers got two more chances before Bell went in from a yard out, which put the team up 12, and then unlike last week they got the two-point conversion. There’s no reason to let the Browns hang around, and scoring a quick 7 to start the third should allow the Steelers to rest some starters in the final 15 minutes.