Why This Offense Can Lead Pittsburgh Back To The Super Bowl 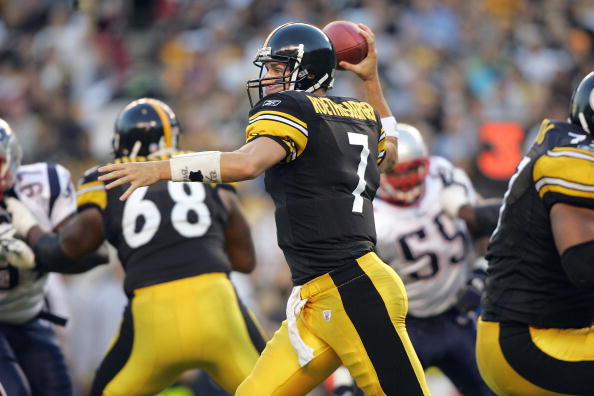 The Steelers may have lost a grand total of five regular season games already this season, but Mike Tomlin’s men are well equipped for Super Bowl success.

Offensively, there is very little doubt that Pittsburgh boast the most dangerous unit in the National Football League and the Ben Roethlisberger-Le’Veon Bell-Antonio Brown trident have stepped up to the plate in recent weeks.

Le’Veon Bell has single-handedly carried the offense since returning from suspension but he has only started to find pay dirt in recent weeks.

With four touchdowns in his last three appearances and well over 500 scrimmage yards, Bell is the key component of Pittsburgh’s offense – but his presence helps to open up the running game for Brown, who caught three touchdown passes against the Indianapolis Colts.

Without a shadow of a doubt, this Pittsburgh offense is as good as anybody else in the NFL and it is hard to back against them on current form. Mike Tomlin’s aggressive coaching style suits their potent offensive unit and fans will be starting to believe that they can go all the way to the Super Bowl despite their poor start.

Betting Sports produced an article on Pittsburgh’s clash with New England earlier this season, and we could be set for a repeat in the AFC championship game this year; albeit with Ben Roethlisberger under center instead of Landry Jones.

But the Steelers have also raised their game on defense in recent weeks – a key factor in the sudden rise in belief and momentum. Pittsburgh recorded eight sacks against AFC North rivals Cleveland Browns in Week 11 before forcing two turnovers in their victory over the Andrew Luck-less Colts on Thanksgiving Thursday.

Ultimately, this defense is starting to make game-changing plays and the offense will relish the opportunity to see more time on the field.

Pittsburgh aren’t necessarily the most complete side in the National Football League but they are certainly one of the most dangerous – and that gives them a fantastic chance of securing yet another Super Bowl ring.

With Big Ben, Bell and Brown firing on all cylinders, the Steelers could be set to challenge deep into the postseason and a healthy defensive unit will only help to give Tomlin’s sparkling offense a greater chance of victory.

NFL Network’s ‘A Football Life’ This Week to Focus on Former Steelers HOF Coach Chuck Noll
Will The Steelers Make The Playoffs?