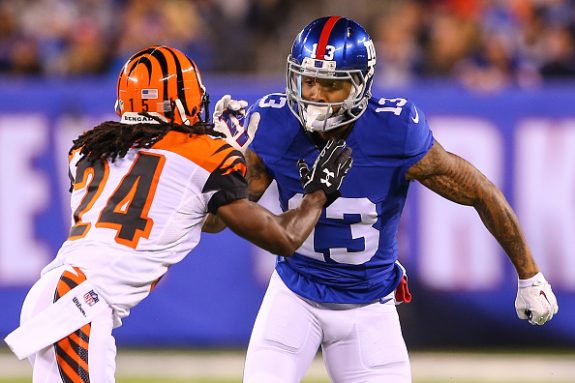 The Steelers are on a two-game winning streak after beating the Browns and Colts, two teams that likely won’t be in the postseason this year, but nevertheless it was critical for the Steelers to get on track after losing four straight.

Now they take on a team on a five-game winning streak, the New York Giants. Last week they dispatched the Browns in Cleveland, but didn’t look all that great in doing it before pulling away in the final quarter with a huge defensive score.

Pittsburgh will look take care of business at home, winning a game they need to win in order to keep pace in the division with the Ravens, who will be in action against the Dolphins, who themselves are on a roll.

With all that said, here’s a quick look at the game, as well as some keys for the black and gold to improve to 7-5 on the season and end the Giants win streak.

Artie Burns for the second time in a few weeks will draw the assignment of taking on a top notch NFC East wide out, this time Odell Beckham Jr. He went up against Dez Bryant of the Cowboys, who caught 6 passes in the Dallas win for 116 yards and a touchdown. Beckham will try to use his size and speed against Burns, who while getting better is clearly going to need some help in this matchup. Don’t leave him on an island, allow the safeties to slide over and help when Manning looks in his direction. No doubt Beckham will get his catches, but if he has a huge day it could be a long one for the Steelers.

Le’Veon Bell is in a zone right now, he’s been in fire the last two weeks against the Browns and Colts, and it’s no surprise that the Steelers won both games. He’s run for 100 yards three times this season and the Steelers are 3-0 in those games, 1-4 when he’s been held below 100 yards. 51 carries the last two weeks seems to be the formula for success for the black and gold, and while the Giants are 4th in the league against the run, allowing just 89.1 yards per game, it will be up to the Steelers O-line to make some plays early to get Bell going. He’s got to be the focal part of the offense against the G-Men.

3. Ben Needs to Be Careful

The Giants defense has been getting better the last few weeks, but they are also taking on QB’s that are at or near the bottom in the league. Consider this, during their win streak no quarterback the Giants have faced even ranks in the top 18 in passer rating. They will see one Sunday in Ben Roethlisberger, who should be able to slowly pick away at the Giants secondary. One key though will be making sure he doesn’t allow the Giants to have short fields with three and outs or turnovers, and he’s got to create plays and find his receivers. He does tend to play better at home, and he’s got to play that way against New York to help the team get a win.

Prediction: I know we shouldn’t get too ahead of ourselves due to wins over the Browns and Colts, but overall I like the swagger of the team and I liked how aggressive they were on offense against the Colts early in the game. They have had good history against Eli Manning in the past, and I think the added time off will benefit in coming up with a game plan. Look for Bell to have a good day, but for Ben to have an even better one, and while both teams will put up points, I like the Steelers to score more – and get out of week 13 with a win over a quality team that looks playoff bound. Pittsburgh 31 New York Giants 24