Steelers Have Had Success Against Peyton Manning’s Little Brother Eli 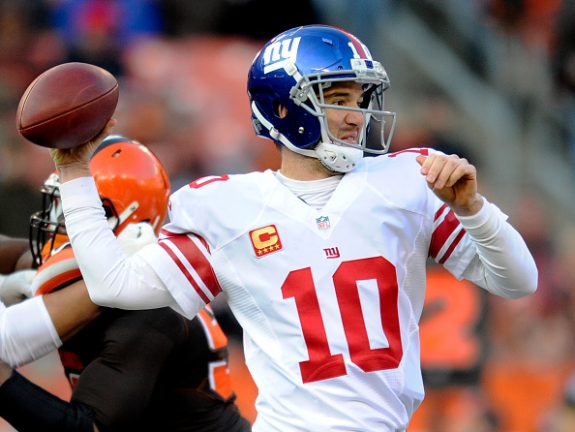 The Steelers and Giants will meet on Sunday at Heinz Field in a critical game for both teams, as the Steelers are tied for first with the Ravens at 6-5, and the Giants are 8-3 on the season, good for second in the NFC East behind the 10-1 Cowboys.

Every time these two teams meet, it’s always about the two quarterbacks, Steelers QB Ben Roethlisberger and Giants thrower Eli Manning. The two have had three matchups since they were drafted in 2004, with the Steelers winning two of the three games, the only loss coming at Heinz Field in 2008.

Both Manning and Ben have won two Super Bowls, but even today the New York Post admits that Roethlisberger has turned out to be a better pro than Eli, despite the fact that Manning was drafted number one overall by the Chargers before his daddy threw a hissy fit and had his son traded to the Giants.

The Steelers defense has done an excellent job against Eli in the three meetings, to the point where he’s never had a game of over 200 yards throwing against the Steelers.

Here’s a breakdown of the three meetings for Manning with the Steelers since being drafted in 2004.

From the Steelers perspective they have done a great job against Eli, holding him to 3 touchdowns, 3 interceptions and an average of 168.6 yards throwing per game.

If they can hold him down to those type of numbers on Sunday, it would be a good bet they should be able to land the Giants their fourth loss of 2016 while getting to 7-5 on the season.

The Steelers Appear to Have Gotten Their Groove Back; Can They Maintain It?
Steelers Gab 2016 Week 13 NFL Preview – New York Giants at Pittsburgh