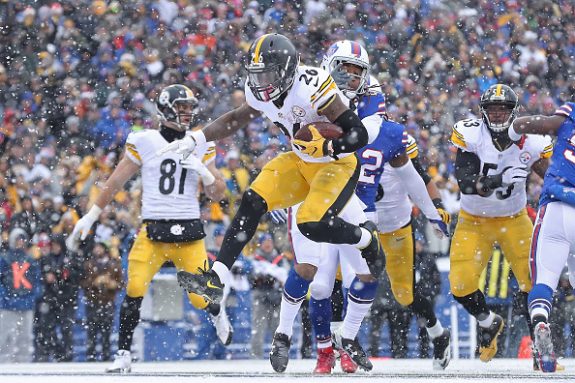 The Steelers at times didn’t make it look pretty, but a history making day for running back Le’Veon Bell was enough as the team won their 4th straight topping the Buffalo Bills 27-20.

The win puts the black and gold at 8-5, and with three games left, all in the AFC North, if they win out they will clinch the division and play at least one home game in the playoffs.

They will wait to see if they will enter week 15 in first in the division or tied, as the 7-5 Ravens will play on Monday night football in New England against the Patriots.

Back to Sunday, the team committed to making sure Bell would get the ball often, and the dynamic running back delivered, setting a single-game Steelers record with 236 yards on a career-high 38 carries and three touchdowns.

He broke the record that was previously set by Willie Parker back on a Thursday night at home against the Browns back in 2006.

Bell paced the Steelers to a 14-0 lead early even after a Ben Roethlisberger interception deep in Buffalo territory. The Bills got back in the game after a second Ben pick, as Tyrod Taylor hit Sammy Watkins for a score with 7:07 to play in the first half to make it a 14-7 game.

The first half ended with Bell going for 77 yards on 13 carries, and with Ben throwing two picks but helping the team get to the seven-point lead.

The second half was all Bell, as the back ran all over the Bills putting up chunks of yards. He ended the day averaging 6.2 yards per carry, and his long on the day was 33 yards.

His five-yard touchdown run with 5:28 to play in the third quarter gave the Steelers a two touchdown lead to make it 21-7.

With the run game going, Bell also had 62 yards receiving to account for 298 of the 460 yards gained by the Steelers in the victory.

Bell now has four straight games in going over 100 yards on the ground, and he’s gone over 600 yards in the last four games, all of them wins by the Steelers.

The Bills made it interesting in the final minutes, as they scored twice in the final 7:27 on Charles Clay’s 40-yard catch and LeSean McCoy’s 3-yard run with 1:25 left to make it 27-20.

Dan Carpenter’s awful onside kick that went just five yards and out of bounds, securing the win for the Steelers. The next test for the team will be the rematch with the Bengals next Sunday at 1pm in Paul Brown Stadium.

First Half Thoughts On the Steelers 14-7 Lead Over the Bills
Signing Le’Veon Bell is a Risk; But One the Steelers Might Just Have to Take