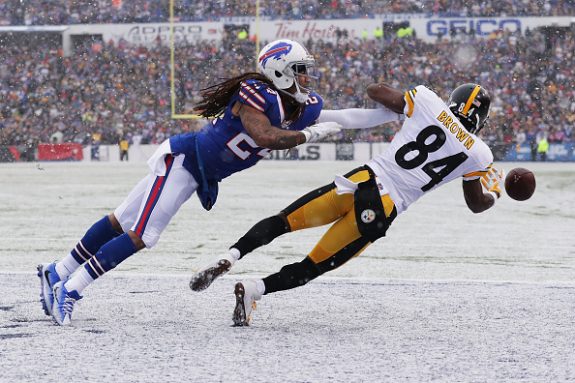 It should be more, but the Steelers have a 7-point lead over the Bills at halftime in Buffalo 14-7 despite two bad turnovers by Ben Roethlisberger.

The team has basically dominated, but it’s still a ball game due to the fact Ben gave up two picks when the game could basically be over.

Here’s some first half thoughts on the way the black and gold are playing and if we think they will maintain the lead and get out of snowy Buffalo at 8-5.

If Ben Roethlisberger didn’t throw two bad picks in the first half, the Steelers could be up by as many as 21 or even 28. Ben’s first pick came driving near the Bills goal line, and the second one directly lead to the Bills only score of the afternoon. The Steelers haven’t been able to get a turnover, but if things just stay the way they are and Ben is more protective of the football, things should go the Steelers way in the second half.

Le’Veon Bell has been having his way with the Bills run D, putting up 5.9 yards per carry, and rushing for 77 yards on 13 carries with a pair of touchdowns. With the weather being a factor, the Steelers should just keep handing the ball off to their best offensive playmaker, and making sure he sees the ball a LOT in the second half. Bell also has 48 yards on 3 catches, which shows again how much of a weapon he is out of the backfield when needed.

When the Steelers have had to watch Tyrod Taylor go back to pass, they have for the most part been able to get some pressure on him. He’s only thrown 8 times, hitting for 46 yards and the touchdown for Buffalo. That Steelers D line has done a good job against the Bills offensive line, and in the second half they may need to throw as the Steelers have also done a good job on LeSean McCoy, holding him to 25 yards on 10 carries in the first half.