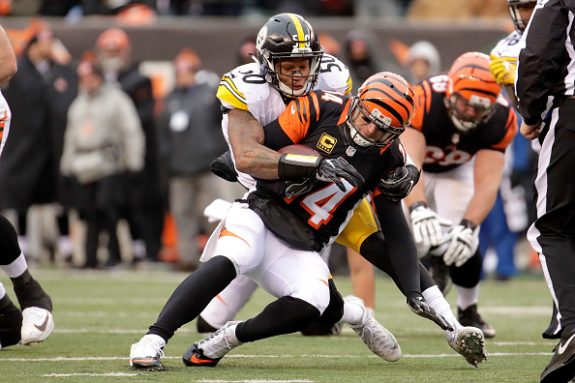 Per usual in the Jungle, the Steelers didn’t make it easy on themselves to find a way to top the Bengals, but in the end they put on a huge comeback, outscoring the Bengals 15-0 in the second half for a big 24-20 win.

The victory keeps them a game up on the Ravens at 9-5, and if they top Baltimore on Christmas Day at Heinz Field, they will clinch the AFC North no matter what happens in week 17 at home against the Browns.

The outcome was in doubt all day, more so after the Bengals shell shocked the Steelers early with a run game that was running over the Steelers with Jeremy Hill, and a defense that kept the Steelers confused as they played with emotion holding Le’Veon Bell in check for the first half.

Cincinnati built a 17-3 lead, and then went up 20-6 after Chris Boswell hit a 49-yard field goal. Credit ‘Boz’ for keeping the Steelers in it, as he tied a Steelers record set by Jeff Reed and Gary Anderson with six field goals on the day.

The first half ended with the Steelers down 20-9, but in the second half it was a totally different game, as the Steelers outgained, outplayed, and outpoised the Bengals.

Cincinnati played like their usual thugs they are, committing penalties and keeping the Steelers in the game while the black and gold chipped at the lead with two more Boswell field goals to make it 20-15.

The Bengals played so poorly in the second half, they had more yards in penalties than in offensive yards, as the Steelers defense held down Andy Dalton and Hill.

Finally down 20-18 the Steelers scored their only touchdown on the day, as they drove to the Bengals 24 and Ben Roethlisberger hit Eli Rogers to give the Steelers a 24-20 lead.

They went for two and didn’t get it, but it didn’t matter as the Bengals offense did nothing going three-and-out in their last drive punting to the Steelers with 5:53 left.

The Steelers smartly went 13 plays, running the clock out as Ben tried to hit Antonio Brown with a pass that would have iced the game, but Brown was held, and with no timeouts the Steelers at the Bengals four took a couple knees and ran out the clock in another memorable battle between the two.

Roethlisberger was 21-for-36 for 286 yards and the score to Rogers. Bell after a slow start still ran for 93 yards on 23 carries, and had five grabs for 38 yards.

Dalton for the Bengals went 16-for-27 for 157 yards, and Hill rushing for Cincy had 43 yards on 20 carries after a quick start.

The Steelers and Ravens will do battle on Christmas Day at 4:30 in a game that will decide the division. The Steelers lost earlier in the season to the Ravens 21-14 in Baltimore.