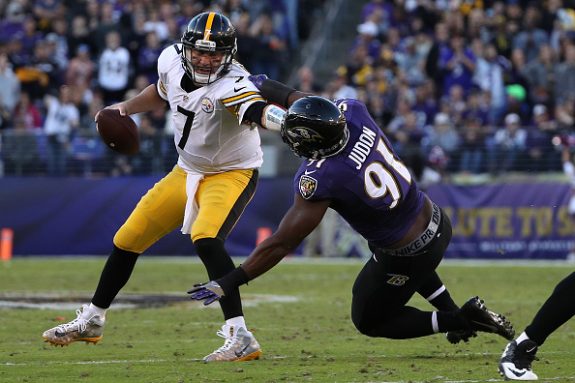 Not much needs to be said or even written the week the Steelers take on the Ravens, even more so with a division title and the trip to the postseason on the line.

The Steelers haven’t exactly been thriving against their biggest rival as of late, losing earlier in the season 21-14 in Baltimore in a game in which they possibly played their most lackluster game of the year (yes even more so than that disaster in Miami), but last season they lost twice to the Ravens, including an awful effort late in the year against backup QB Ryan Mallett.

Now though it’s the Steelers that enter Sunday’s Christmas day game on a roll, and the Ravens are on the ones tettering on disaster, as they don’t look like a team that could challenge for the top spot in the AFC.

Nevertheless, the Steelers should be warned they can’t take the Ravens lightly, as we saw last year what can happen when the Steelers don’t appear to have their entire focus on the birds from Baltimore.

If there’s one team the Ravens get up for, it’s the Steelers, and already Sunday after their not so dominant win over the Eagles, Ravens players were quick to turn their attention to the black and gold.

“This is what you live for,” Ravens safety Eric Weddle said.

“It’s all the hours, all the sacrifice, all the time — it’s for a chance to win the division and get into the dance. You hope and dream every day you’re getting up at 6 a.m. or 5 a.m., you don’t see your kids — it’s for this chance, and it’s all worth it.

“We’ll be ready to roll. There is nothing more out there for us than to have a chance at the division against a rival team. It’s going to be amazing.”

Baltimore has problems, but let’s not forget this is a Steelers team that had to rally from down 20-6 Sunday to the Bengals. If they think they can throw their helmets on the field against their biggest rival and walk out with a title, they had better think again.

You would think by now they would know better.