Flashback Friday: Batch Leads the Steelers To a Huge Last Play Win in Baltimore in 2012 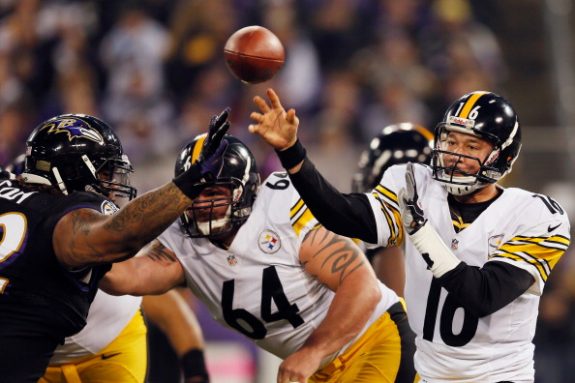 The Steelers were reeling during the 2012 season after a late November loss to the Browns in which the team turned the ball over eight times and lost 20-14.

The club fell to 6-5, and without starting quarterback Ben Roethlisberger the team was set to travel to Baltimore for a matchup with the Ravens with the season falling apart.

It was to be Batch’s last start with the Steelers, and it was a memorable one, leading the Steelers to a final play win over the Ravens as Shaun Suisham kicked a field goal to give the black and gold a 23-20 win.

Today we go back in time, with a ‘Flashback Friday’ to relive the win at M&T Bank Stadium, breaking the Ravens 15-game home win streak.

Sunday in Baltimore, the Steelers, like an old prize fighter backed in the corner late in a fight, fought tooth and nail with a team that was supposed to dominate them, and in the end used a Shaun Suisham 42-yard field goal at the buzzer to beat the Ravens 23-20.

Batch outplayed the supposed “best QB in the NFL” in Joe Flacco, throwing 25-for-36 for 276 yards with a touchdown and an interception. He led the Steelers for 17 second half points, including 10 in the fourth quarter to clinch the win.

The game-winning drive started at the Steelers 15, and they went 12 plays and 61 yards to set up Suisham for the shot to end a long Ravens home winning streak. Which they did.

Baltimore had just two possessions in the fourth quarter, and with starting CB Ike Taylor on the bench most of the game with a bum ankle, they were only able to gain five yards on seven plays with a turnover by Flacco on a fumble.

Flacco went 16-for-34 for 188 yards with a touchdown and a pick. He also lost a fumble after a hit by James Harrison that gave the ball the Steelers in possession to score the game-tying TD on a pass from Batch to TE Heath Miller to make it 20 all.

Click HERE to Read the Rest of the Game Story from That Day in Baltimore!

See How the Steelers Run the Table in the New Book “The Greatest Football Team of All Time: 2015 Pittsburgh Steelers”
Steelers Are Biggest Week 1 Favorites