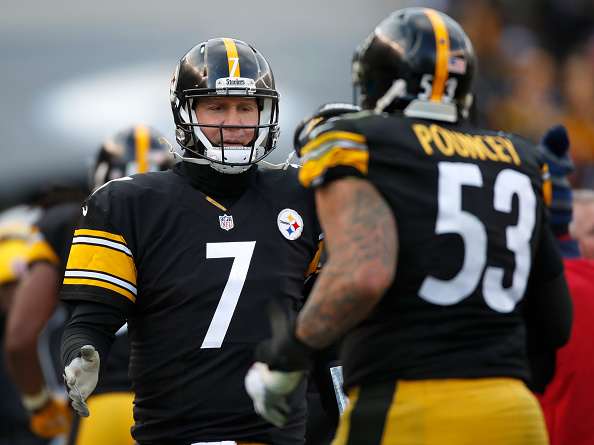 Just a few weeks now until NFL teams report to training camps around the country, with the Pittsburgh Steelers heading to Saint Vincent College in Latrobe, Pa., on July 27. The Steelers’ first exhibition game is at the New York Giants on Aug. 11. Lines for Week 1 of the 2017 regular season have been out for weeks at BetOnline, and the Steelers are the biggest favorites on the board at -8 in Cleveland.

It’s well known that Steelers quarterback Ben Roethlisberger still harbors a grudge against the Browns, the team he grew up rooting for in Lima, Ohio, about 170 miles from Cleveland. In the 2004 NFL Draft, the Washington Redskins chose Miami (Fla.) safety Sean Taylor at No. 5. With Taylor off the board, the Browns’ brass considered taking Roethlisberger out of Miami (Ohio) at No. 6 but opted to take another Hurricane, tight end Kellen Winslow Jr. One reason the Browns passed was because Big Ben was fighting the small-school stigma coming out of Miami (Ohio).

“When Cleveland passed on me, technically my hometown team, that was it,” Roethlisberger once said. “I couldn’t wait to have a team and play the Browns at some point.”

Big Ben is an unthinkable 21-2 in his career as a starter against Cleveland – which is still looking for a franchise quarterback. Roethlisberger has completed 62.5 percent of his passes in those 23 games for 5,490 yards, 35 touchdowns and 17 interceptions, good for a rating of 95.8.

If it’s possible for Roethlisberger to be even more motivated against the Browns in Week 1, Cleveland rookie defensive end Myles Garrett, the No. 1 overall pick in this year’s draft, has called him out.  “Big Ben!” Garrett told ESPN’s Randy Moss. “Big Ben is a Super Bowl winner and I heard he’s hard to take down. So, I’m coming for him first, [to] chop him down.”

That’s fairly tame talk compared to when then-Browns defensive tackle Gerard Warren said “kill the head and the body’s dead” regarding Roethlisberger when Big Ben was a rookie. You can’t talk like that in the modern-day NFL. Roethlisberger got a kick out of it Garrett’s words, though.

“I was talking to (center Maurkice Pouncey) after Garrett called me out,” Roethlisberger said. “Pounce got a big kick out of it. All of my linemen enjoyed hearing it. They can’t wait to get started. I can’t, either.”

It’s still not clear which quarterback the Steelers’ defenders will get to tee off on: trade acquisition Brock Osweiler, second-year Cody Kessler or second-year Notre Dame rookie DeShone Kizer. The Browns are one of only a few teams with a quarterback battle in camp.

Pittsburgh has won eight of its past 10 games in Cleveland as a betting favorite and has covered five of the 10. The Steelers are 7-3 straight up and 4-6 against the spread in their past 10 as a road favorite against anyone of at least 8 points. They were twice in 2016, winning 24-9 in Cleveland in Week 11 and then 28-7 just four days later in Indianapolis. Pittsburgh’s last loss as at least an 8-point road favorite was 20-17 at Baltimore in Week 16 of the 2015 season.

Roethlisberger is a +1200 third-favorite at BetOnline to win his first NFL MVP Award behind Tom Brady (+400) and Aaron Rodgers (+800). Big Ben is +1600 to lead the NFL in passing yardage for a second time in his career. In 2014, he and Drew Brees tied at 4,952 yards. Brees is the +300 favorite on this prop. BetOnline always has competitive odds. Before considering placing some action, review them at the site.