Would the Steelers Have Had Time to Run Another Play Sunday If Brown Didn’t Score? 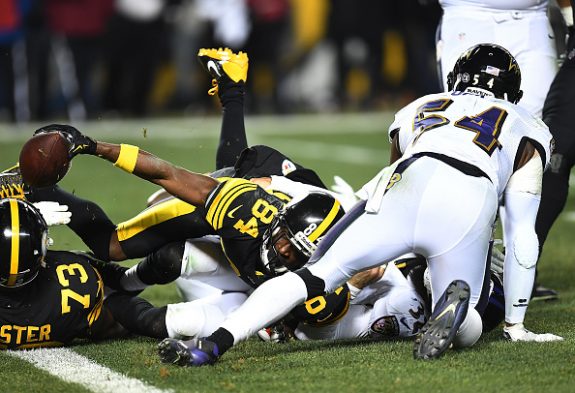 It’s always fun to play Monday morning quarterback, even more so when it doesn’t matter.

Antonio Brown’s stretch that clinched the Steelers a division title was a thing of beauty, but there’s plenty of ‘what ifs’ had Brown not been able to score or been tackled at the half-yard line.

On the NFL Network telecast, it was stated more than once they felt the clock might have run out if Brown was called down or was tackled without being able to score.

He scored with nine seconds left, and with no timeouts, it would have been chaos trying to get players to the line of scrimmage to spike the ball or just to run another play.

Dale Lolly today tweeted out (again not that it really matters now) that Steelers QB Ben Roethlisberger says that the team would have been able to get another play off, and it would have been him just take the snap and running a sneak if he had to get the half yard for the score.

It’s interesting to think about, and there’s no doubt everyone in Steeler Nation is happy it didn’t have to happen, but imagine for a second if Brown didn’t score and Ben is wrong – and the division title likely would have been lost at the half yard line.

Steelers Pull Off a Late Christmas Miracle; Clinch the AFC North with a 31-27 Win Over Baltimore
Sounds Like Steelers Star Players Will Rest Sunday in Finale Vs Browns