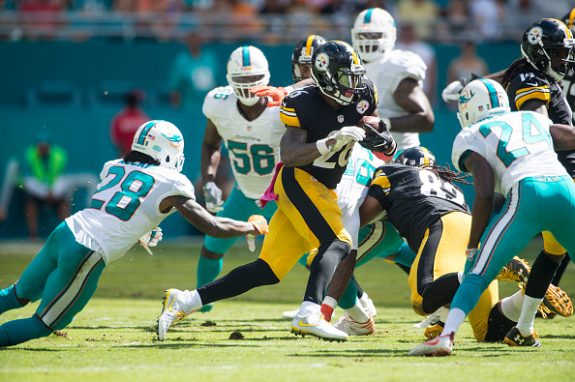 The Steelers play their first home playoff game in two seasons today as they host the Miami Dolphins, and they are heavy favorites to move on next week to take on the Chiefs in Arrowhead in the AFC Divisional Playoff Game.

The Fins come in with a backup quarterback playing on the road in a place where temps should be around zero during the game. The formula looks like it’s all in the favor of the Steelers, but let’s not forget three seasons back when the Steelers fell at home to a Dolphins team in the snow in a game they really needed for a playoff run.

Today is the first time we will ever see the three ‘B’s’ all play in a playoff game, which should spell good things for the black and gold.

Here’s our three keys for the Steelers to win another playoff game and move on for another week in the NFL’s second season.

While the Dolphins pass game isn’t expected to be a huge threat, if there’s one player who can make plays downfield for Miami it’s wide out Jarvis Landry, who will be up against Steelers CB Artie Burns most of the day. The rookie has gotten better as the year has gone on, taking on the likes of Dez Bryant and others, but Landry is going to be another threat, having caught 94 passes this year for 1136 yards. Make sure Burns gets help covering Landry today.

The Steelers path to success the last seven weeks has been pretty easy to see, get the ball as much as you can to running back Le’Veon Bell. He’s been the spark plug to a much better offense, and even in the Ravens game that got off to a slow start, he was the key to the comeback and win. Pass game or run game, this is the player that has to have a big game this week and going forward in the playoffs if the Steelers are going to get to the promise land of Super Bowl 51.

The Steelers should follow the formula of the rival Pats from last week, getting a lead and getting pressure on Matt Moore. Once New England had established what they wanted to do, the Dolphins were never a threat in the game other than a few minutes before New England extended the lead for good. The Pats were able to do some hurry up and also use the tight ends as well, two things the Steelers might want to take a long look at doing if possible today against the Fins.

Prediction: The Steelers lost by 15 the last time around, and today need to stuff the run game and not allow third down conversions, things that happened the last time in South Florida. I can see this being a game where the Steelers use Bell early and often, and get the lead they need in order to put Miami away by the midway point of the third quarter. I can’t see Matt Moore going on the road as well as the Steelers have played and winning a playoff game. Remember, there’s a reason the Steelers are double digit favorites. Pittsburgh 27 Miami 10