Steelers Squish the Fish; Slam the Dolphins 30-12 in AFC Wild Card Game to Move On in Playoffs 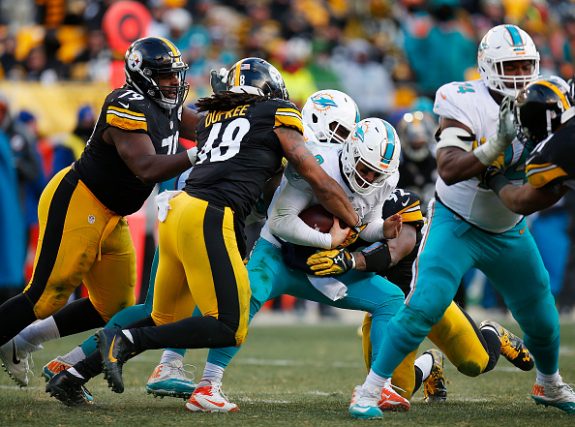 For the second time in two seasons, the Steelers are moving on to the second round of the postseason.

Sunday in a freezer otherwise known as Heinz Field, the black and gold made the Miami Dolphins black and blue, beating them up 30-12 to advance to play the Kansas City Chiefs at Arrowhead Stadium next Sunday.

The Steelers slammed Miami early, putting up 14 points and 220 offensive yards in the first quarter, as they built a 20-3 lead less than three minutes into the second quarter.

As expected, the offense was led by the three Steelers ‘B’s,’ as Le’Veon Bell blasted through Miami for 167 yards on 20 carries and two touchdowns, while wide out Antonio Brown had two quick touchdowns, and ended the day with five grabs for 124 yards and two scores.

Ben Roethlisberger threw for 197 yards on 13-for-18 passing with the two scores to Brown. He threw two sloppy interceptions, but the Dolphins were not able to take advantage of them.

The Steelers defense was a huge story as well, flying all over the place and holding running back Jay Ajayi, who had over 200 yards against the Steelers in October, to just 33 yards on 16 carries.

Matt Moore took some vicious hits by Steelers defenders, including one shot by Bud Dupree which drew a flag and knocked the QB out of the game for a play.

On the day Moore was sacked five times, and ended the day 29-for-36 for 289 yards with a touchdown and interception, and a QB rating of 97.8.

The Steelers started quickly, scoring on a screen as Ben hit Brown, and after a Jesse James block the Steeler wide out raced in to give the team a 7-0 lead.

On the second drive Brown took in a pass on a crossing pattern, and 62 yards later the black and gold were up 14-0.

Miami was able to cut the Steelers lead to 14-3, but then the Steelers came back with another solid drive, as this time it was nothing but runs by Bell, a drive in which he scored on a one-yard run to make it 20-3 after Chris Boswell missed an extra point.

The Dolphins got another field goal to make it 20-6, and after Ben’s first pick late in the first half, they drove down the field and were in a position to score when James Harrison got a huge strip sack which the Steelers recovered to keep the lead at 14 at half.

The Steelers scored 10 points in the third quarter to put the game away, with Boswell hitting a field goal, and Bell scoring from eight yards out to make it a 30-6 game.

Miami scored with 5:57 left as Damien Williams caught a four-yard pass from Moore to wrap up the score at 30-12 after the Dolphins went for two and failed.

It was a good day all the way around for the Steelers, and right away they are installed as a one-point favorite to beat the Chiefs in the AFC Divisional Playoff game next week in Kansas City.