The Chiefs Can Be Had Sunday in Arrowhead; Here’s Some Steelers Keys to Doing It 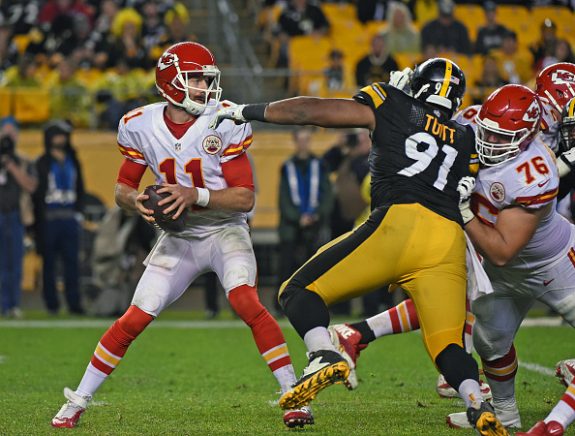 Sunday’s AFC Divisional showdown between the Steelers and Chiefs in Arrowhead Stadium should be a good old fashioned fight that could easily take 59 minutes plus to decide.

The Steelers handed Kansas City their biggest loss of the season in week four on prime time, winning rather easily 43-14 in week four in a game that saw Pittsburgh put up 436 yards of offense despite rain most of the game.

Since that game that put KC at 2-2, they won 10 of their last 12 to end the season, winning in week 17 to clinch the AFC West and get the number two seed in the AFC.

The other Chiefs losses – in Houston in week two, and to both Tampa Bay and Tennessee – both at home. In the other three losses, the team scored 12, 17 and 17 points in those losses.

The most shocking of the losses came in week 14 to the Titans at home, as they led 14-0 and 17-7 before Tennessee, led by Marcus Mariota, put on a rally to win the game on a field goal on the final play.

Here’s a couple looks at the Chiefs losses and what they have in common.

In the four losses Kansas City has had, they turned the ball over eight times (3 vs Houston, 2 vs Pittsburgh, 2 vs TB, 1 vs Tennessee). Consider that the team had 17 turnovers the entire season, it’s easy to see that getting them to be sloppy and forcing turnovers, like the Steelers did against the Dolphins at home Sunday, is a way to get Alex Smith and the KC offense off their game. Look for the Steelers to try and duplicate their game plan in game one when they showed Smith different looks and made the KC offense work for everything they gained in a blowout.

Alex Smith isn’t going to throw for 400 yards, but he can be an effective QB if given time in the pocket and a lead. Again there’s some things in the four losses he didn’t do very well, like handle pressure. The Steelers put more pressure on him than they had in the first three games of the 2016 season combined, and the same went in the KC week two loss at Houston. Tampa Bay didn’t get to Smith for sacks, but KC only had the ball for about 25 minutes in that loss, and forced them to play catch up, something they don’t do well. In the Tennessee game, Smith had just 163 yards passing, and missed on 13 of 28 passes in the eventual loss.

3. Make Them Play from Behind

The Chiefs and their D is at their best when they get a lead, and in three of the four losses three KC offense had to try to play catch up, which with Smith isn’t easy to do. They don’t have the offensive playmakers like the Steelers, and in the games against Houston, the Steelers and Buccaneers, they never had the lead. The Steelers led 22-0 after a quarter and 36-0 before KC eventually scored in garbage time. It won’t be that easy on Sunday, but if the black and gold can get up 7 or 10 points early, it could spell their route to getting to the AFC Title game the following week.