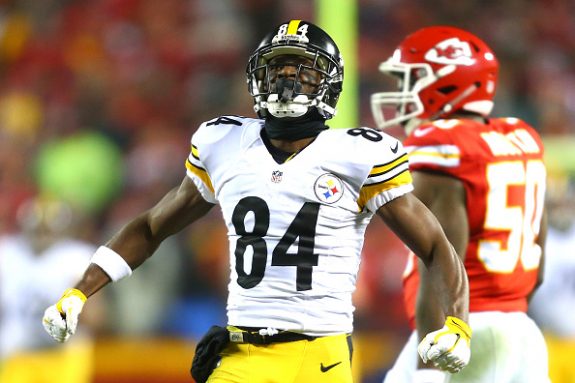 It’s six days away from the AFC Title game and a chance for the Steelers to advance to the Super Bowl where they would meet the winner of the Atlanta Falcons and Green Bay Packers.

They have in front of them a team that has been their toughest test by far over the past 16 seasons, a team that has beaten them twice in AFC Title games, and in all but two games with Tom Brady under center have defeated the Steelers.

Places like bestbettingwebsites.org.uk already have the Patriots as solid favorites, sitting at 6-point favorites to move on to Super Bowl LI.

So instead of making things easier, already there’s a feeling that Sunday’s ‘Facebook Gate’ may give New England all the ammunition they need to make it three in a row over the Steelers in AFC Championship Games.

In case you have been under a rock since the Steelers beat the Chiefs in the AFC Divisional Playoff Game Sunday night, Antonio Brown following the game went live on Facebook with his personal account during the teams’ locker room session.

It was in that session that Steelers coach Mike Tomlin, who for sure wasn’t aware anyone was recording him, called the Patriots ‘As#holes,’ stating that the Steelers “spotted these a–h—- a day and a half.”

I actually turned on Brown’s feed for a few minutes, and it’s mostly just a bunch of half naked guys with big smiles on their faces as they celebrate a win in the locker room.

Nevertheless, Brown should have known better, and for a guy that should have his ego in check less than a week before the biggest game of his life, worrying about the 20,000 fans that were watching the feed (at least that’s the number I saw when on the feed) should have been the last thing on his mind.

Now though, while unintentional, the Patriots have billboard material for a game they are already favored in, and why not, they usually treat the Steelers like the unwanted step children when they take the field.

The last three times the teams have played, it’s not been pretty for the Steelers. In two games in Foxborough (2013 and the opener of the 2015 season), the Steelers were beaten soundly both times 55-31 and 28-21.

Earlier this season at Heinz Field, sure the Steelers didn’t have Ben Roethlisberger, but let’s face it, would the outcome have been any different?

Landry Jones did what he could, but in the end the Steelers couldn’t stop Brady and company, and the Patriots left Pittsburgh with a 27-16 win.

Now, with the Super Bowl in sight, instead of getting ready for the biggest day of their lives, Brown and his mates were busy dancing around on Facebook celebrating a game in which they didn’t manage to score a touchdown.

“We’ll be ready for their a–. But you ain’t got to tell them we’re coming,” Tomlin said in the what should have been private speech.

“Keep a low profile, and let’s get ready to ball like this up again here in a few days and be right back at it. That’s our story.”

Sadly the Steelers story was seen and heard by over 20,000 people thanks to a flat out stupid act by one of the best players on the team.

Shame on Brown for that.