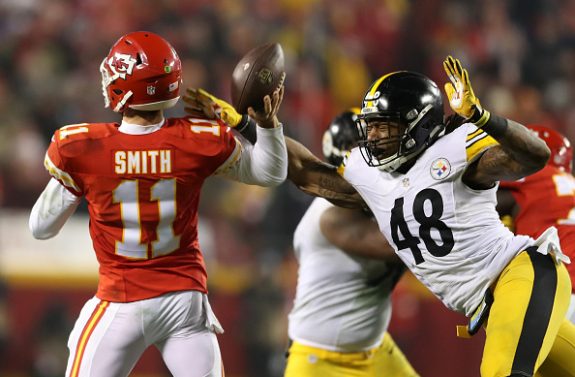 If you have said the Steelers would have won in Kansas City on Sunday night without scoring a touchdown, many probably would have said you were crazy.

But sometimes in the playoffs, that’s how it goes, and that’s exactly how it went for the Steelers in their latest postseason win, a gutsy 18-16 win that probably should have been a lot more if the Steelers could have scored touchdowns instead of having to settle for six Chris Boswell field goals.

Many betting websites like gamblingwebsites.org.uk had the game as the Steelers as slight underdogs, but in the end they did their part to dominate the Chiefs for most of the 60 minutes.

In the end though they will take it, and after two very different postseason wins, the team will get a third AFC Title Game shot at the big bad New England Patriots Sunday in Foxboro for the right to play in Super Bowl LI.

The Steelers lost to the Patriots in the AFC Title Game in 2001 and 2004, but both those losses came at Heinz Field.

Sunday against the Chiefs, the Steelers dominated in terms of yards and time of possession, putting up 389 yards to the Chiefs 227, and holding the ball 34:13 to 25:47.

Le’Veon Bell again was the driving force for the Steelers, pounding through for 170 yards rushing on 30 carries, a 5.7 yards per rush. The back has set records for his first two playoff games, running for 337 yards in the two wins over the Dolphins and now Kansas City.

Boswell’s foot was just a big a factor, setting a record for field goals in a Steelers playoff game with six. He hit field goals of 22, 38, 36, 45 and two 43-yard kicks for all 18 Steelers points.

The Chiefs were able to mount one final drive, getting two big calls along the way, and also converting a key fourth-and-7, and eventually getting a one-yard Spencer Ware score with 2:43 to play to make it 18-16.

Kansas City converted the two-point conversion when Alex Smith hit Demetrius Harris to appear to tie the game at 18, but on the play, left tackle Eric Fisher was called for holding on James Harrison, appearing to pull him down.

Smith’s second two-point attempt was batted away as he looked to hit Jeremy Maclin, keeping the Steelers up by two.

The Steelers needed a first down to seal the game, and after a Bell run, a pass from Ben Roethlisberger to Eli Rogers for five yards, the Steelers had a 3rd-and-3 from the 12-yard line at the two minute warning.

Going for the win, Roethlisberger rolled out, and hit Antonio Brown with a 7-yard pass for the first down to seal the win, and send the Steelers to their 16th AFC Championship game.

Roethlisberger had a pretty forgettable night, going 20-for-31 for 224 yards with an end zone pick that could at the time have seen the Steelers go up 16-7 in the second quarter.

The Steelers defense allowed their first opening drive touchdowns of the season, but buckled down after that, allowing the Chiefs to 227 yards, including 61 on the ground.

Speedy Tyreek Hill had three carries for 18 yards, four catches for 27 yards, and in four kickoffs his longest run back was just 21 yards.

Brown had six catches for the Steelers for 108 yards, including a 52-yard grab after the Chiefs had scored their opening drive touchdown to get the Steelers back into the game.

It wasn’t pretty, and if the Steelers want to make it to their first Super Bowl since their last appearance in 2010, they are going to have to play a lot better against Tom Brady and company.

For now, the 2016 Steelers are already a step ahead of 2015, and now with a third playoff win next Sunday, they have a chance to reach their 9th Super Bowl in franchise history.