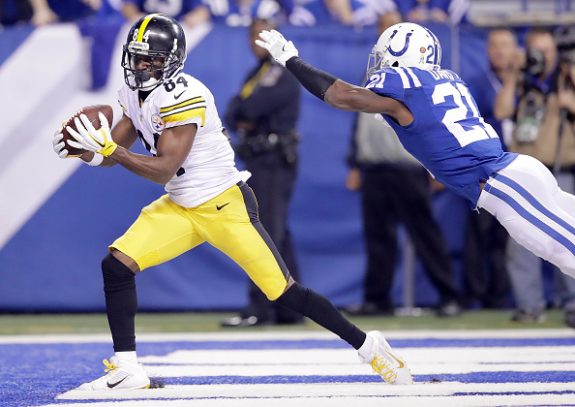 Antonio Brown called Sunday’s temper tantrum after not getting thrown a pass off a broken route ‘passion’ and while many in Steeler Nation have forgiven Brown, one former teammate has come out and isn’t exactly saying nice things about the wide out.

That former teammate is safety Ryan Clark, who was around Brown at the end of his NFL career before retiring and going into the media. Clark went on ESPN Radio and went so far as to say that AB is ‘tricking’ people with his smile and into thinking that he’s a ‘team’ guy.

“Antonio has done an extremely good job of tricking people,” Clark said. “He has that smile and when he talks he seems extremely ‘team’, [and has other believing] oh this is a great team guy, he always shows up to play, he didn’t hold out last year to get his money, so he’s done a very good spin job of having us think or making people think who don’t know him that it’s all about the Pittsburgh Steelers, I’m just a hard worker who is here to win football games.

“Nah, Antonio Brown loves Antonio Brown. And Antonio Brown was upset, God forbid, that a guy that (averages) over 10 targets in the first three games of the season is missed one time. He behaved…if Odell Beckham Jr. does this, it’s on every station. It’s on every single show. And for me, I think it’s actually different than any of Odell’s outbursts. Everything Odell does, to me, is an implosion. He was just going nuts because he couldn’t figure out any other way to better express himself. He wasn’t going at coaches, he wasn’t arguing about not getting the ball, he wanted to win games and he wanted to be a part of winning games.

“This is, you miss me one time on a play I could have scored a touchdown, that would have helped me. Not would have helped the team, it would have helped me. God forbid you check the ball down to Le’Veon Bell. Oh my goodness, that’s the worst thing in the world, Lev might get the ball, I can’t take it, I’m gonna pass out. You can’t behave that way because the quarterback came off his read a little early and you were wide open. This is who he is. I said that was who he was last year when it came to the phone thing.”

Clark’s reference to the ‘phone’ thing is when Brown live streamed the Steelers locker room post game win in the post season, something that coach Mike Tomlin and the team was none too happy about.

It will be interesting if Brown is asked about Clark’s comments (you know he will be) and what his response back to the former Steelers safety will be.