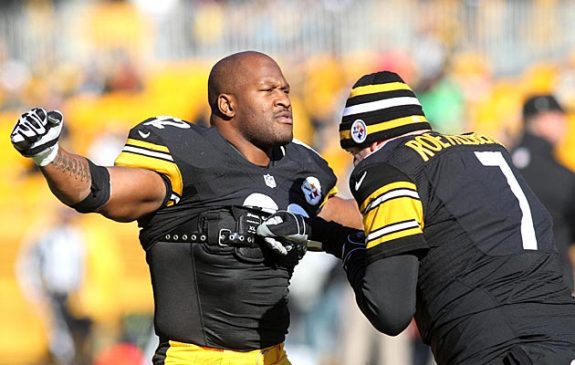 It’s a move that probably based on playing time shouldn’t come as a big surprise, yet one that likely won’t make Steeler Nation all that happy two days before Christmas.

Today the team announced they have activated offensive tackle Marcus Gilbert from the Reserve/Suspended List, but at the same time, they have released linebacker James Harrison.

The one-time NFL Defensive Player of the Year leaves the team for a second (and almost for sure final) time after coming out of retirement to join them in 2014.

Harrison at 39 had seen his playing time dwindle down to just about nothing, and other than a big sack at the end of the win over the Chiefs, there wasn’t many highlights this season for the linebacker.

Coach Mike Tomlin said time after time that the team would use Harrison when needed, but with the rash of injuries the team had suffered, it was a move the club likely had to make.

We have activated OT Marcus Gilbert from the Reserve/Suspended by Commissioner List to our active roster, and released LB James Harrison. https://t.co/yF8wLQD9Ac