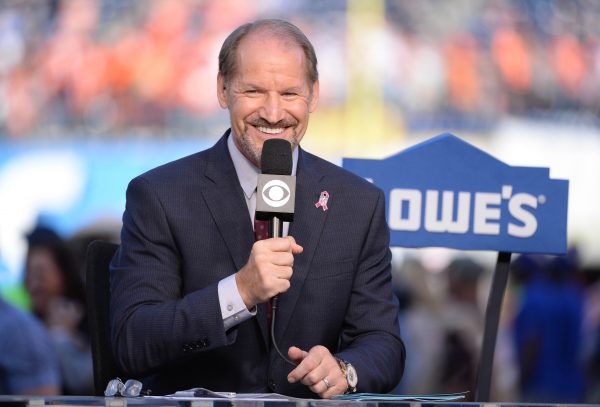 Bill Cowher lived up to his word, never coaching again after leaving the Steelers after the 2006 season.

The former Steelers coach was informed Saturday evening during the CBS’s pregame show that he’ll be part of the Hall of Fame’s 2020 class.

The coach known as ‘the chin’ led the Steelers to their 5th Super Bowl championship in 2005, leading the black and gold to a title win in Detroit 21-10 over the Seahawks in Super Bowl XL.

Cowher was talking about Baltimore Ravens quarterback Lamar Jackson with Phil Simms when Pro Football Hall of Fame president David Baker came out and surprised Cowher from behind.

Baker is the one who knocks on the hotel door to let new inductees know they’ve been voted in the HOF, and Cowher seemed to realize what was happening.

“This isn’t right that this is happening now,” Cowher said with a smile.

Baker then told Cowher he was in the Hall’s 2020 class. Cowher’s wife and daughter came out to hug him. The crew on the CBS set then all came to congratulate him.

Cowher surprisingly kept his emotions together well as he was told about the honor.

“I’m a blessed man, and I’ve been very blessed to be surrounded by some pretty special people,” Cowher said.

He became the Steelers head coach in 1992, taking over for Hall of Fame coach Chuck Noll, and led the black and gold to a number of division titles as well as AFC Title games, but was not able to get over the hump.

The team struggled in 2006, and in true fashion the team rallied to finish 8-8, with a final day overtime win over the Bengals in Cincy to knock them out of the playoffs.

The Hall of Fame is doing a superclass in 2020 to celebrate the NFL’s 100th season. The rest of that extra class — which includes 10 seniors (players who last played more than 25 seasons ago), three contributors (an individual other than a player or coach) and two coaches (who last coached more than five seasons ago) — will be announced Wednesday.