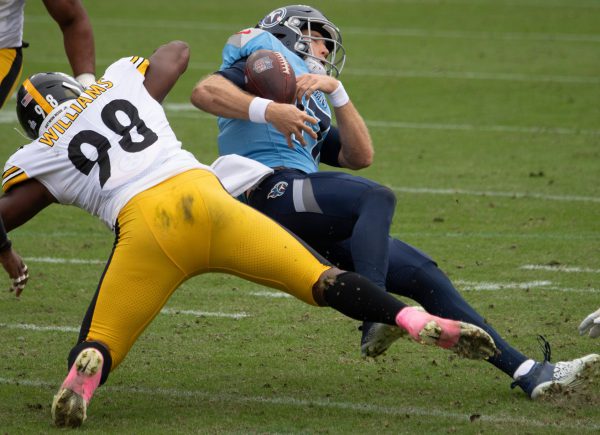 It’s always amazing to me to see fans upset when their team wins, no matter the circumstances.

Sunday the Steelers were up 20 points, yet due to a number of different reasons had to hang on in the final 10 minutes to a three-point lead, and needed a Titans missed field goal in the final seconds to earn the win.

If you would have said Sunday at say 10am that the Steelers would win, be 6-0 and play as well as they did (at least for the first 30 minutes), I don’t think many would turn it down.

Instead, it seems like the overall notion is that the Steelers were “lucky” to have won, and they have a lot of work to do.

That second part is true, and there’s no doubt with the demeanor that the team showed in their post game interviews they were not all that pleased with how things ended up.

At the same time, winning a game and being able to learn a valuable lesson from it is a whole lot better than losing and learning that same lesson.

Now at 6-0 with a monster AFC North game looming, here’s a couple thoughts with the off day in the NFL today and getting ready for the start of the NFL “work week” on Wednesday.

Yes entering Sunday’s game Ben Roethlisberger had just one pick, and after it he had four, but honestly I don’t think it’s that big of an issue.

The final pick hurt as the team was going for the kill, and the matchup having JuJu Smith-Schuster lined up with a linebacker and Ben trying to squeeze it in was the right call, it’s just a shame that the Titans made the right play to get a tipped interception.

One pick came on a hail mary, and another was on a tipped pass. Those things will happen. Many said that Ryan Tannehill outplayed Ben on Sunday, but if you ask Tannehill today if he would have taken the win and been okay throwing three picks, you know he would have been just fine with it.

Steelers backup RB Benny Snell has 44 carries in the first six games, that’s about 7 carries per game. Of course he had 19 carries in the opener against the Giants in which he ran for 113 yards. Since then he’s not had a game in which he’s carried the ball more than seven times.

While James Conner is having an outstanding season and has shown toughness week after week rushing the ball against some very good defenses, I think the team should look more into giving Snell a chance to rush the ball.

Sunday against the Titans he ran the ball only twice, the lowest amount this season he’s run the football.

Every time he’s run the ball it seems he’s done good things, but for whatever reason the team seems to not want to give him a lot of chances.

He’s averaging 3.8 yards per carry, and part of the issue as well is having Conner wear down, as many know of his injury issues in the past.

Let’s see if Snell gets more of a chance against the tough Ravens.

The Steelers schedule two weeks ago looked like a meat grinder, with the team having to host the then 4-1 Browns, and then going to the undefeated Titans followed by a game in Baltimore.

The team is 2-0, and now all that’s left on the “tough” portion of the slate is the game in Baltimore, and then they will have a third straight road game the following week in Dallas against the pretty bad 2-5 Cowboys.

The Cowboys have former Bengals QB Andy Dalton, but after a cheap shot last week he’s in concussion protocol, and it’s possible he might not be ready for the Steelers game next Sunday.

Instead the team went with rookie Ben DiNucci, who didn’t do much in a bad loss to Washington on the road.

After the game in Baltimore and then Dallas, the Steelers have Joe Burrow and the Bengals at home, the Jags on the road (they are 1-6), and then another matchup with the Ravens on Thanksgiving night at Heinz Field.

It’s been pointed out that this week might just be the toughest left for the Steelers, and while it won’t be easy, getting a win could line up for a long undefeated spell for the Steelers.

* Work to do on Defense

The Steelers defense had a pretty bad second half on Sunday, with Minkah Fitzpatrick whiffing on the long TD by Andre Brown, and then allowing way too many yards to Tannehill and the Titans offense allowing them to get back into the game.

They put pressure on Tannehill in the first half, 30 minutes of football that was about as perfect on each side of the ball as you can get.

Then the Titans started to play much better, and the defense just didn’t live up to the hype they normally play at.

It’s a whole other animal this week with Lamar Jackson and the physical run game of the Ravens, but it’s playing right into the Steelers strength, so it will be fun to see what team can deliver the knockout blow and if that Steelers D can get back on track after a poor final 30 minutes Sunday.