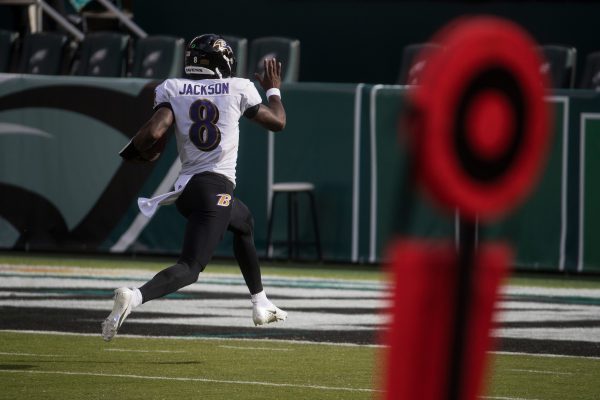 The Steelers have their biggest task of the season awaiting them on Sunday in Baltimore (haven’t we said that the last three weeks?!), and if the team can get past Baltimore it will send a loud message to the rest of the NFL.

Tuesday Steelers coach Mike Tomlin spoke to the media about the health of the team, as well as looking ahead to the AFC North battle that is always one of the biggest games of the season.

Here’s a few takeaways from the presser as the black and gold get ready to get back to work on Wednesday.

The Ravens have a very solid offensive unit that became only more explosive when the team decided to bite the bullet and go with Lamar Jackson as the team’s starting quarterback.

Right now Baltimore is ranked third in the NFL rushing the ball, putting up 164.3 yards per game on the ground.

In the air Jackson has had some struggles, but with “Hollywood” Brown the pass catchers on the team can still get it done.

The Ravens are dead last when it comes to yards, right now sitting at 177.8 yards per game, 1,067 yards overall.

With the running backs and tight ends though, the Ravens are still a very dangerous team on offense.

The Steelers have the best defense in the NFL right now, and proved that again Sunday in their 27-24 win over the Titans.

Tuesday Tomlin pointed out a pretty simple fact when it comes to defense – you can’t win if you don’t give up any points.

“If they can’t score, you can’t lose. It’s the kind of approach that we take,” Tomlin said.

“That commitment goes back to player acquisitions, the development of schematics, just the nuts and bolts things when you build your program. I just think good, winning, consistent football, top-notch defense, particularly defense that is stout against the run, is a significant component of that.”

The black and gold rank #1 allowing just 286.3 yards per game, in a season in which offenses are putting up massive numbers.

Yes the unit Sunday had some breakdowns, but looking at the overall aspect of the job the Steelers D has done, they will give the Ravens fits on Sunday – but is it enough to walk out of Maryland with a “W”?

* Can The “D” Put the Clamps on Jackson?

The Steelers have seen Jackson just once thus far in two seasons, as he didn’t play in the finale last season (a Ravens win that knocked the Steelers out of the playoffs), and in the first meeting he threw for 161 yards and ran for 70 yards.

The end result was a Ravens overtime win, 26-23 that came about after a turnover in overtime that allowed Baltimore to do enough to get the victory on a field goal.

The Steelers will need to do some creative things on defense, as without Devin Bush the team needs to find someone to “spy” and keep Jackson in check so he doesn’t take off.

It could be Vince Williams, or maybe Robert Spillane on certain plays that will have the task of making sure to keep Jackson in the pocket.

“We are just going to work to win this game and look at what he is doing right now and how he’s utilizing his skills and talents and the people at his disposal in an effort to win,” Tomlin said.

“Each week is different. It may be the same guy. We might have different challenges the next time we play him.

“That’s just how these things evolve and go over the course of the season. Sure, there are some lessons to be learned. There’s some things to look back at, but we better be prepared for what he is doing and doing in the present.”

In 2020 Jackson has rushed for 346 yards on 50 carries, this coming off a season where he scampered for 1,206 yards and was the most dynamic player in the league winning the MVP.

Against the Eagles two weeks back, he raced for 109 yards and a score in the Baltimore win.

“You should anticipate it will be a rough and tumble game because history tells you that,” Tomlin said on Tuesday.

“And this year is the same.”

The Steelers with Mike Tomlin as coach are 11-13 against Baltimore, and some of their most bitter losses over the years have come against the Ravens, including a playoff loss in a wild card game in 2014.

The two clubs generally don’t get along, and it’s always going to come down to what team is more physical at the end of the day.

The Steelers claim they will not be intimated by Baltimore, and the tone has to be set early in this battle for the top spot in the AFC North.