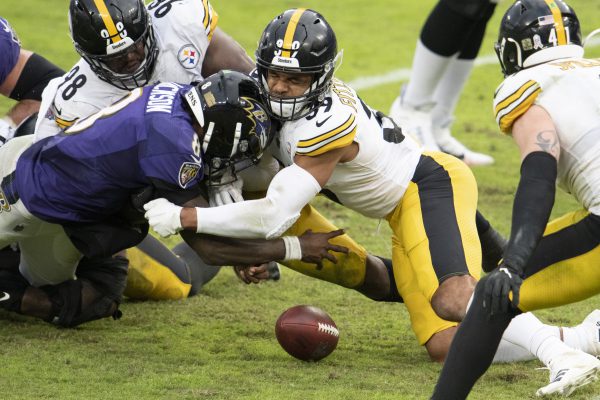 When they went on the road and beat the Titans it was “oh the Titans were nowhere near as good as their record, and they were due to lose.”

Now what will the excuse for haters of Steeler Nation come up with?

Sunday the black and gold won maybe their most impressive game since the AFC North clincher on December 25th 2016 when Antonio Brown reached over the goal line to beat the Ravens with 8 seconds left.

They were down 10, rallied to take the lead 21-17 in the second half, gave it back, and rallied to grab the lead again at 28-24 with 7:29 left, and stopped two Ravens offensive drives to seal the win.

28-24, a gutsy effort that will soon not be forgotten to put the team at 7-0 for the first time since 1978. That season they lost to the Houston Oilers in week eight to drop to 7-1, but still won the Super Bowl.

If you’re wondering, the Steelers travel to Dallas to play a Cowboys team that is 2-5.

For now there was plenty of drama in this one, and here’s a quick couple takeaways from the Steelers four-point win over their biggest rivals.

The Ravens seemed calm and cool in their last sustained drive of the game, getting the ball with 7:29 left from their own 25-yard line.

They quickly marched down the field, and got to the Steelers eight-yard line with a 4th-and-3 at the two minute warning.

The play call was rather obvious, run Lamar Jackson and allow him to create. He did, if you count getting slammed by the Steelers front line and fumbling creating something.

It was a great job by the Steelers to stay home, and not over commit one way or another to one player. You felt it would be Jackson, and it appeared Minkah Fitzpatrick made the final hit that jarred the ball out.

Then there was the last Ravens chance with :52 seconds left starting at their 37. They again hit on a few plays, putting themselves in position to go for the win twice from the Steelers 23-yard line with 8 seconds left. 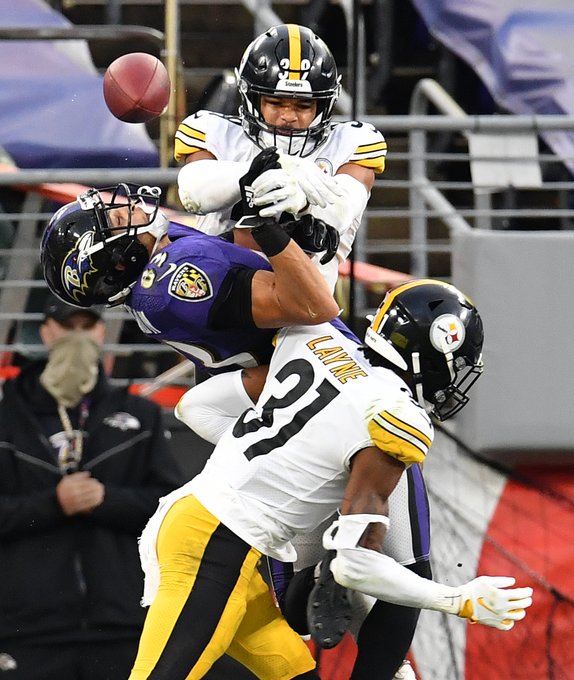 The first play the Steelers brought pressure and nearly sacked Jackson, the second again it was Fitzpatrick, who went for a pick and nearly took Willie Snead’s head off on what was the last play of the game.

2. Don’t Call it a Bounce Back

As poorly as the Steelers offense played in the 1st and 2nd quarter Sunday, they bounced back in a big way over the final 30 minutes, scoring 21 points to earn the win.

After Ben Roethlisberger’s awful first half and even first drive of the third quarter, and finally got settled in, and quickly looked more like the QB that was red-hot to start the game in Tennessee.

Big Ben completed 9 of 13 passes for 107 yards and a touchdown in the third quarter, and in the 4th quarter came right back going 7 of 9 passes for 80 yards, not running the ball once and hitting Chase Claypool with the game-winning score.

Overall the effort will be talked about like a game where somehow as bad as the first half looked the club was able to rally, but it starts with Ben, and as he finally got things going in the right direction, the rest of the team followed.

“I came here for [second half] Ben Roethlisberger,” Steelers TE Eric Ebron said. We all loved second half Ben Sunday.

3. Winning Yet Learning at the Same Time

The Ravens finished with 265 rush yards, a clear indication that while many after this game are saying the Steelers have “arrived,” they have plenty of work to do on defense in prep for the rematch on Turkey Day.

Baltimore was very close to knocking off the Steelers, and it wouldn’t stun anyone to see them come to Heinz Field on Thanksgiving and handing the Steelers a loss.

Now without possibly two top defensive linemen next week in Cam Heyward and Tyson Alualu, who left early with a knee injury, the Steelers can’t assume they will show up in Jerry’s World down in Dallas and it’ll be easy to get a win.

What Sunday proved again though is a mental toughness in this team we’ve not seen in a very long time.

They could have packed it up at 17-7 at half and simply said “oh well, 6-1 isn’t bad,” but instead they overcame what was a Ravens team who really had a lot to play for knowing now they are two back of the Steelers with already a loss against them.

This team needs to continue to improve and learn as the wins pile up. They will still have to deal with the Ravens again and the Chiefs are still waiting in the wings.

Takeaways from Steelers Coach Mike Tomlin’s Tuesday Press Conference
Steelers Not Likely to Face Dalton Sunday in Dallas, Who Starts for the Cowboys?