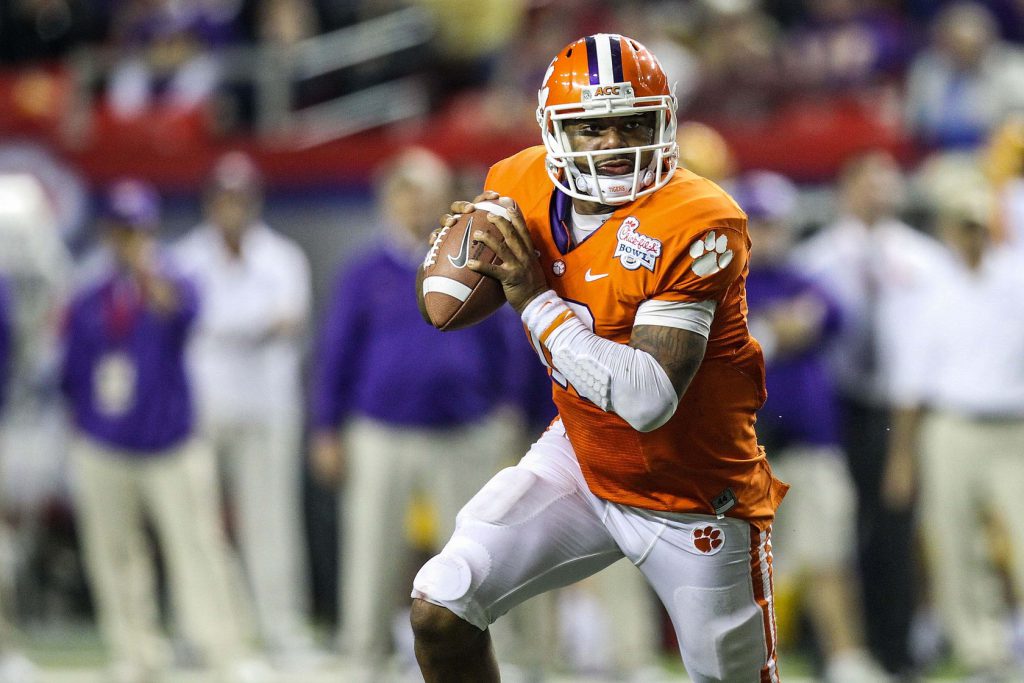 The 2021 NFL Draft will be here before you know it and there will be much debate about which players go where. That’s the interesting part of the NFL’s annual meat market as there is always plenty of speculation to go around and strong opinions are voiced each year by the teams’ fanbases.

Naturally, this year is no different but the best bets for today, or any other day leading up to Thursday, April 29th, is that there will be at least four quarterbacks selected in the opening round. Below we will throw our hat into the ring and venture a guess as to where the newest first-round class of future NFL quarterbacks will land. Let’s go!

The fact that the Clemson Tigers got beat up by the Ohio State Buckeyes in their CFP semifinal will do little to deter the Jacksonville Jaguars from tapping Trevor Lawrence as the No. 1 overall pick in the draft. The 6’6” junior out of Cartersville, Georgia has brought his team to the College Football Playoff in all of his three years as a starter and has a national championship (2018) to show for it. He will depart Clemson one year early with a 34-2 record since starting as a true freshman. He is one of the most accomplished and celebrated college quarterbacks in NCAA history and despite leaving Clemson on a losing note, he is considered a can’t-miss prospect and will be in a Jaguars’ uniform this upcoming season.

The Jets have been seeking a franchise quarterback for decades and their most recent foray into that endeavor has ended in failure. Sam Darnold was chosen with the third overall pick in the 2018 draft but he has yet to make the kind of impact expected of a quarterback chosen that high. Thus, the conventional wisdom is that they will move on from Darnold and try to get a second or third-round pick in return. This will allow them to choose any available college quarterback in the nation not named Trevor Lawrence. Ohio State’s Justin Fields fits that bill even after a truncated 2020 season that saw him torch Clemson for six touchdowns in their CFP showdown and end the season with 2100 passing yards, 22 touchdowns, 6 interceptions, and a stunning 70.2 completion percentage in eight games. Oh, and he’s mobile too as evidenced by his 4.7 yards per carry average and five rushing touchdowns last season.

The next domino to fall could very well be Zach Wilson landing in Carolina unless the Falcons decide the time is now to replace an aging Matt Ryan or find a trade partner with their fourth overall pick. Barring that, it’s quite possible the Panthers bid Teddy Bridgewater adieu and welcome the talented Mr. Wilson into their lovin’ arms. The 6’3” junior has a tremendous skill set but according to one NFL college scout, there are concerns that could cause him to fall to the middle of the first round.

“Johnny Manziel comp without the [drugs]. [Wilson] is fun to watch, but is he a 1-year flash in the pan? He’s a backyard baller who is fun to watch.”

“Someone will grab him in the first [round]. I doubt he gets to the second [round] because once the third quarterback goes, after Lawrence and Fields, there will be a run on them. [Wilson] has character concerns, rich kid who is an entitled brat – uncle owns Jet Blue -, parents are a pain, not a leader, selfish, and he’s a know-it-all.

“His positives are that he’s super competitive, not to get scared and won’t back down, extremely confident, very smart with keen recall and teammates will play for him.”

Lance set the NCAA record for most passing attempts in a full season without an interception and led the FCS in passer efficiency as a redshirt freshman in 2019 while leading North Dakota State to an undefeated FCS national championship in 2019. The FCS did not conduct a 2020 season due to COVID-19 concerns but the fact that Lance was so prolific in his lone college season, even against FCS competition, has many of the NFL scouts salivating. However, it is still a small body of work against weak competition which means many teams will sober up and begin to question the wisdom of spending a top 10 pick on the lightly tested 20-year-old. If no one decides to trade up to snatch him, he could very well slip to the Vikings who would be hard-pressed not to take him even with Kirk Cousins as their starter. If not, the Patriots sorely need a quarterback of the future and would likely take Lance with the No. 15 pick.