“The Bus” Speaks Out On Tomlin; Porter 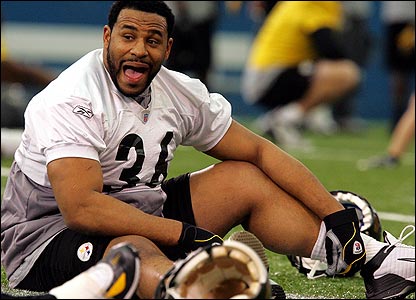 Former Steelers and future Hall of Fame running back Jerome Bettis is speaking his mind on his former team, and right now by all indications he says he likes what he sees coming for the 2007 Pittsburgh Steelers. Speaking on NFL’s Total Access on Thursday, Bettis stated that he has heard a lot of good things about the Steelers and their new head coach – Mike Tomlin.

“I’m hearing a lot of good things, from the players, from the coaches. I got a chance to talk to coach Tomlin, and everything he said is great – he’s got a great approach about how he’s coming into Pittsburgh,” Bettis said. “Obviously it’s a difficult situation when you come in after a coach like coach Cowher was, especially with the players. But coach Tomlin has won over players pretty early in the process and they are going to play for him, so I expect the Steelers to be pretty good this year.”

On another subject, “The Bus” says that the team is going to take a bit of a hit with no #55 Joey Porter there to play linebacker this season. The Steelers released Porter this offseason and on March 7th he signed a deal with the Miami Dolphins. Bettis thinks that Porter’s play is going to be missed while his mouth may be able to be replaced.

“Obviously your going to miss a guy like Joey Porter on the field and off the field,” Bettis said. “On the field, he was the vocal leader of that defense, and he was a guy you could lean to to get you pumped, get you going. To not have him, you are going to lose a little bit, but you have guys like Casey Hampton who can step in and be a vocal guy, so you got a lot of other guys there that can fill that void. Your just going to have to have someone come in and play that outside linebacker position as good as Joey did.”