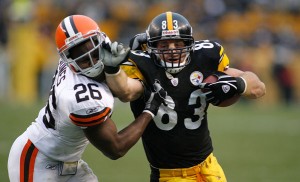 Last season tight end Heath Miller set career highs in catches with 48, and also pulled in three touchdowns for the Super Bowl champs. This year he’s in the final year of his deal, and while many think he’ll be back as a Steeler in 2010 and beyond, he’s playing for a new deal. Below is a look back and a look ahead at what Miller should do for fantasy football owners in 2009:

2008 Season: Miller as stated above set career highs in catches with 48, and always seems to be a solid red-zone threat for Ben Roethlisberger. He also had three touchdowns and 514 yards. Miller’s best game actually came in one of the Steelers four losses, as he had 8 grabs for 69 yards in the week 16 loss to the Titans. Unless you get a fluke 60-70 yard catch from Miller, he’s never going to get you the 100+ yard games catching the ball.

Looking Ahead to the 09 Season: For leagues that use tight ends, Miller is a middle of the pack type of player. Again, it’s going to be tough for him to ever get over 100 yards in a game, but his average of about 30-60 yards is about right. The key is to play him on the weeks where he scores, and that’s a crapshoot as well, as he only had three TD’s last year. That being said, he’s a safe middle of the pack tight end that can surprise with production every now that then.

Expected Numbers: Miller will likely be in the hunt again for career highs in catches and yards, meaning you can expect about 45-50 grabs and 550-600 yards with 3-5 TD’s.

Holmes Among a Few Players Already Talking Super Bowl for the Steelers
A Big Question About the Steelers – Will the Run Game Show Itself in 2009?