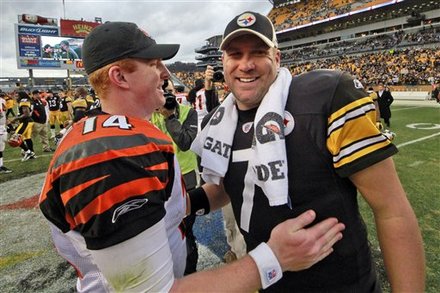 Most experts agree that Pittsburgh Steelers quarterback Ben Roethlisberger is a better quarterback than Andy Dalton of the Cincinnati Bengals.  As these two AFC North rivals take the field at Paul Brown Stadium, fireworks are anticipated.  Here is a look at the pair and who Daily Fantasy Live is picking as the go-to guy.

Roethlisberger has the accuracy and ability to control the line of scrimmage and has shown over the past four weeks that he is still the most valuable asset in the Steelers offense due to his ability to create plays.  Roethlisberger has forced passes this season that resulted in interceptions, but was clean in week 13 against the Indianapolis Colts.  The Steelers offense is overachieving right now – something the Bengals didn’t see in the week 8 meeting that resulted in Cincy handing the Steelers a six-point loss.

Dalton is a quick-striker, earning the name ‘red ryder’ for his pop-pop style in the pass.  Behind one of the best offensive lines in the league this season, Dalton has shown accuracy deep as well.  Dalton has a past of turning over the ball and taking sacks, but has improved his scrambling.  Dalton doesn’t have the experience and will find the Steelers defense hungry for payback.