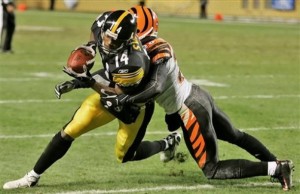 James Walker the AFC North Blogger at ESPN did a piece about some of the sleepers this year in the division, and the Steelers have three on the list:

Why: Most casual fans outside of Pittsburgh are not aware of how poor the Steelers’ punting was last season. On a bad week, it was horrendous. On a good week, it was average. Pittsburgh’s No. 1 defense last year overshadowed this issue. But help is on the way in Sepulveda, who averaged 42.4 yards a punt in 2007 (38.4-yard net). He missed all of 2008 with major knee surgery and has become a free-agent pickup of sorts for the Steelers.

Why: There is not as much pressure on Sweed as some may think. He is expected to fill a role as Pittsburgh’s No. 3 receiver, so that doesn’t require him to start. But the Steelers and offensive coordinator Bruce Arians love to use the trips package, which helped Nate Washington earn a big contract with the Tennessee Titans this offseason. It is much more difficult to get open in the NFL than it is to catch the football. So Sweed already has the difficult part figured out.

Why: Can a former first-round pick be a sleeper? Yes, when you are a backup tailback coming off a major injury with the defending Super Bowl champions. Mendenhall is actually in a good spot. The pressure is on him to contribute, not to take over games. He didn’t show much in his first season. But combined with Willie Parker and Mewelde Moore, Mendenhall should help Pittsburgh restart its ground attack.

A Break Down of the Steelers 2009 Salary Cap
Join Us In Denver On November 9th!